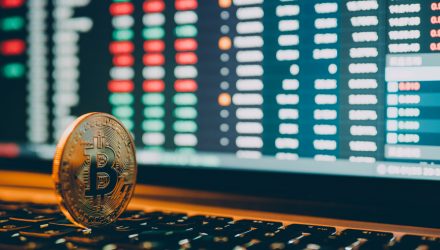 Inflation fears continue to rack the stock market, which is also spilling over into the crypto markets. Bitcoin fell under $40,000, highlighting its recent correlation with stocks.

The U.S. Federal Reserve is already looking to lighten its balance sheet by offloading assets it purchased to help shore up the economy when the pandemic hit. That includes assets like bond-focused exchange traded funds (ETFs), which is adding more pain to the debt market.

During Tuesday’s trading session, bitcoin did rise back over the $40,000 level. Geopolitical tensions will also likely be a factor in the stock markets, which could translate into pressure on the crypto markets.

“Bitcoin and traditional markets have continued to respond negatively to expectations that the U.S. Fed will tighten its monetary policy to fight inflation, and Tuesday’s CPI release seems to be weighing heavily,” said Riyad Carey, a research analyst at Kaiko. “Globally, the continuing war in Ukraine and increasing shutdowns in China are dragging on markets.”

Bitcoin’s recent push back over $40,000 came on the notion that dissipating inflation could be occurring given the latest March consumer prices report. Bitcoin has often been viewed as an inflation hedge, but lately, the leading cryptocurrency has been moving in tandem with the stock markets.

Both the stock and crypto markets have stumbled out of the gate in 2022, facing the headwinds of inflation fears. Since then, they’ve recovered before stumbling against recently, but the hope is that dissipating inflation could spark another rally in the second quarter.

“Consumer prices for March increased 1.2% month-to-month and 8.5% annually, the Labor Department said on Tuesday,” according to a CNBC report. “But traders were focusing on the core reading, which excludes food and energy prices. Core CPI in March increased 0.3%, below the consensus economist estimate from Dow Jones of 0.5%. Core prices on an annual basis were up 6.5%.”

“The big news in the March report was that core price pressures finally appear to be moderating,” wrote Andrew Hunter, senior U.S. economist at Capital Economics, who also noted that March will “mark the peak” for rising inflation.