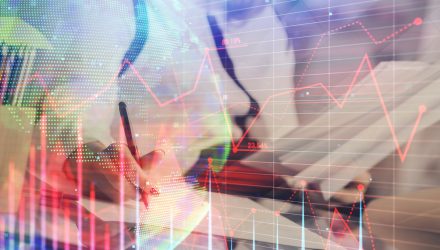 Inflation continues to soar, and while interest rate increases are looming, for now, the Fed has resolved to leave rates at their near-zero historic lows. Advisors and investors have pivoted to all manner of inflationary hedge investments, and while gold has historically been considered the standard, bitcoin is beginning to assert itself as a potential inflationary hedge as well.

Bitcoin, though a cryptocurrency, has a well-established fixed supply, something that many other cryptocurrencies lack. Because it has a finite supply, bitcoin has definition that some digital tokens and coins do not have, positioning it to be a possible hedge for inflation, according to ProShares.

“While it’s still early days, the combination of fixed supply and the prospects for growing adoption does suggest that bitcoin may be an effective hedge against inflation and a resistant store of value,” Simeon Hyman, Global Investment Strategist at ProShares, wrote in a communication to ETF Trends.

The digital gold equivalent functions fine in a portfolio by itself but makes sense as an element within a basket of commodities and real assets as well, particularly when being used as an inflation hedge. Bitcoin has demonstrated a relatively low correlation to stocks and bonds within a traditional portfolio. The addition of bitcoin, with its low correlation as well as volatility, can work in favor of a portfolio to provide diversification through “modest allocation.”

Investors who are leery of spot exposure and the challenges associated with direct investment should consider bitcoin futures, which transact within the futures market, overseen by the Commodity Futures Trading Commission (CFTC), and are regulated by the SEC when carried within an ETF. It’s a space that has seen enormous interest with the launch of the first bitcoin futures ETF in the U.S. last fall, the ProShares Bitcoin Strategy ETF (BITO), as advisors and investors view it as a well-constructed way to gain exposure to the price performance of bitcoin when seeking capital appreciation.

“Since bitcoin futures began trading, they have shown a correlation of less than 0.2 with stocks and about zero with bonds (correlation measured against S&P 500 Index and Bloomberg Barclays U.S. Aggregate Bond Index, respectively),” wrote Hyman, demonstrating the diversification that bitcoin futures can offer within a portfolio.