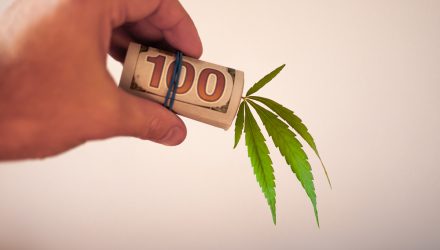 Marijuana- and cannabis-related exchange traded funds have come a long way from a smaller niche plays, attracting billions of dollars as the sentiment and regulatory environment surrounding the idea of legalizing pot begins to gain traction.

“A lot of things happened. Reddit happened for starters. Regulatory environment shifted for starters. I’m not entirely surprised by the investor interest in these funds,” Lara Crigger, Managing Editor, ETF Trends, said on the latest episode of the ETF Prime podcast, “Coinbase & Cannabis”.

For example, the ETFMG Alternative Harvest ETF (MJ), which was the first cannabis-related ETF to reach the $1 billion mark, now holds close to $1.7 billion in assets under management. The fund has surged 39.8% year-to-date. Over the past year, MJ has attracted $603.1 billion in assets in new inflows, according to ETFdb data.

The U.S. cannabis industry has faced regulatory and financial hurdles constricting its growth, but those constraints have eased at a accelerating pace. America’s most recent election season also saw more voters and lawmakers express interest in removing the stigma of marijuana and legalizing pot for recreational use.

“What, I guess, did surprise me was just how mainstream cannabis investing became and so quickly, especially among institutions,” Crigger added.

As initial promises become reality, individual state legalizations for marijuana are picking up steam, and there are now talks on Capitol Hill about legalizing marijuana at the federal level.

To learn more about Crigger’s take on the cannabis landscape, listen to the latest ETF Prime podcast here.