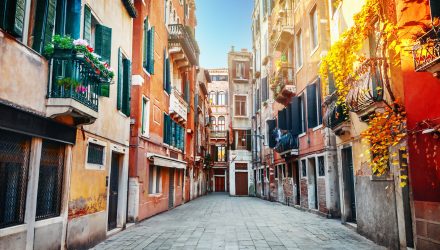 Investors willing to wager on a rebound for ex-US developed market equities have plenty of cost-effective exchange traded funds to consider, including the Schwab International Equity ETF (NYSEARCA: SCHF).

The $16.4 billion SCHF follows the FTSE Developed ex US Index, which is comprised of large- and mid-cap stocks from developed markets outside the U.S. That index is weighted by market capitalization and features exposure to 24 developed markets, excluding the U.S.

“While the fund is limited to large- and mid-cap names, it still provides effective diversification,” said Morningstar in a note out Friday. “It holds more than 1,300 stocks, and its 10 largest names account for only 10% of its assets. The fund excludes companies listed in emerging markets, while a typical competitor has 7% of its assets allocated to companies from developing regions. This modest difference can limit the portfolio’s diversification potential but shouldn’t hurt its long-term category-relative performance.”

SCHF holds just over 1,460 stocks, 21.6% of which hail from the financial services sector. Industrial and consumer staples names combine for over a quarter of the ETF’s roster while consumer discretionary and healthcare stocks combine for 20.7%. Thanks in part to its low fee, SCHF has enjoyed mostly solid performance since inception.

“From its launch in November 2009 through May 2018 the fund’s total and risk-adjusted returns landed near the midpoint of the category. Foreign markets as a whole have not performed well over the past decade, and many of the fund’s better-performing competitors had more defensive portfolios,” according to Morningstar.