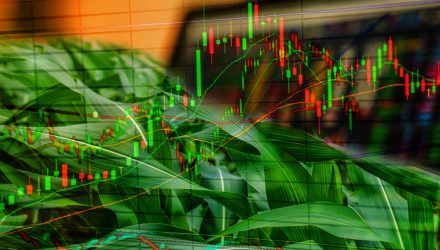 As farmers forgo planting cash crops this season, the stunted supply conditions could set up agricultural prices and related exchange traded funds that track soft commodities like corn to rebound ahead.

The Teucrium Corn Fund (CORN), the lone ETF that tracks the corn markets, has declined 21.7% year-to-date.

With a contracting economy and demand for corn-based biofuel falling off, farmers are leaving thousands of acres of irrigated fields fallow, Reuters reports.

“It costs money to put a crop out,” Jim Gerlach, president of U.S. broker A/C Trading, told Reuters. “It is better to make nothing than to lose money.”

For example, Troy Schneider’s farm in eastern Colorado has switched to growing grass for his cows.

“With the economy shut down and lack of driving, it drove the price down too much,” Schneider told Reuters. “Why even take a chance? You are going to lose money on everything.”

Farmers have historically switched crops due to market conditions and seasonal or weather trends, but leaving the ground has been a new option for U.S. farmers who try to squeeze out as much out of their land as possible.

According to the latest government figures, corn and cotton plantings, in particular, were far below initial expectations, with corn seeding in June down by the most amount from March in 37 years.

The sudden shift has been a stark contrast from last year going into 2020, as many anticipated corn to be among the best crops to turn a profit due to easing tensions with China and rising exports through the initial Phase 1 trade deal in January. A U.S. Agriculture Department report issued in March revealed that farmers expected to seed 96.999 million acres of corn, which would have been the second-highest amount since the Great Depression.

However, in the USDA’s latest June acreage report, corn plantings had dropped 5.1% from the March expectations, which contributed to the 10.3% drop in prices.