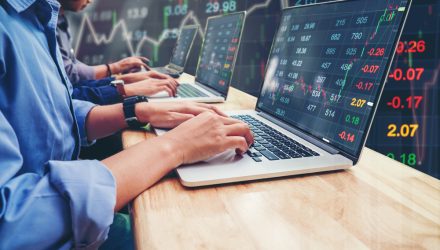 Understanding How an ETF Trades

Many mutual fund shareholders purchased ETFs in 2021. While the shift toward ETFs has been underway for years, we think 2021 was a distinct year for ETF adoption. Last year, actively managed mutual funds from Guinness Atkinson and Dimensional Funds were converted into ETFs; asset managers, like Fidelity, launched equity ETFs with the same names as popular mutual funds, such as Fidelity Magellan ETF (FMAG); and a record $692 billion flowed into equity ETFs while more than $400 billion further bled from mutual funds. The growing supply and demand is encouraging for the ETF industry, but it is important that advisors and end investors appreciate the differences between a mutual fund and an ETF.

The T in ETF is often misunderstood. For those used to buying and selling mutual funds, the ETF world can seem foreign. Regardless of whether an order to buy or sell shares in a mutual fund is submitted over a weekend, on a Monday morning, or even late afternoon trading hours on a Monday, the transaction is completed after the market close on that Monday based on the net asset value (NAV) of the portfolio. But ETFs are traded on an exchange similar to a stock like Apple during market hours based on the ETF’s price and not its NAV. Orders to purchase an ETF that are submitted over the weekend will be executed very soon after the market opens, even if the underlying stocks inside the ETF have not begun trading. Meanwhile, orders submitted in the middle of the day will be handled immediately unless they are tendered as limit orders to be processed only when the ETF reaches a predetermined price.

While market orders will be executed quickly, CFRA and other ETF industry experts encourage investors to use limit orders because they provide greater control, as market forces that are unrelated to the ETF can cause the price to rise or fall unexpectedly. In addition, trading within the first and last 30 minutes of market hours is discouraged.

ETFs do not always trade at NAV. Like an equity mutual fund, an equity ETF is a basket of securities that should only be purchased or sold based on the prospects of the securities inside. However, ETFs will often trade at a premium or a discount to its NAV. While this can occur for a variety of reasons, a common one is based on whether the underlying securities are trading when the ETF is. For example, the American Century Quality Diversified International ETF (QINT) trades on the New York Stock Exchange but holds stocks that trade in Japan, France, the United Kingdom, and other non-U.S. markets. The stocks inside QINT have ceased trading by the time the afternoon rolls around in the United States and news developments emerge that impact global markets.

ETFs will also trade at a premium or a discount based on the demand for the security.

When optimistic investors drive up demand for a fund, it can cause the price to rise faster than those of the underlying securities, and a premium may occur. Conversely, if pessimistic investors redeem a large number of ETF shares quickly, those shares may trade at a discount. However, thanks to the creation and redemption process, deviations between the ETF price and the NAV tend to be short-lived. In the fourth quarter of 2021, QINT closed exactly at its NAV just 14% of the time and at a premium or discount of 69% and 17% of the time, respectively. However, the widest premium or discount recorded was a negligible 0.3%.

CFRA will be hosting a webinar titled “How to Get the Most Out of Your ETF Trades on January 20 at 1 pm ET. We will be joined by Matt Lewis, Vice President and Head of ETF Implementation and Capital Markets with American Century to discuss best practices for trading ETFs. https://go.cfraresearch.com/ETF_Trades