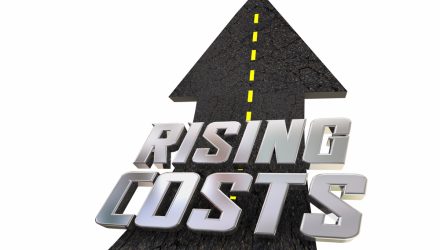 Growth stocks and related exchange traded funds maintain their lead as the broader market pared gains in response to the Federal Reserve’s official statement that it would hike interest rates for the first time since 2018.

The Federal Reserve raised its benchmark interest rates by a quarter-percentage-point as officials look to obviate a potentially overheating economy and dampen inflation, which is at its highest level in four decades, the Wall Street Journal reports.

Most officials anticipate the fed-funds rate to increase to at least 1.875% by the end of 2022 and rise to around 2.75% by the end of 2023 or at least seven-quarter-percentage-point hikes for the year followed by more next year. The projections slightly disappointed markets as some had believed the Fed would be more conservative in its rate hikes in face of the volatility stemming from the Russia-Ukraine war.

While the U.S. central bank acknowledged the uncertainty due to the war between Russia and Ukraine and the ongoing COVID-19 concerns, officials argued that the “ongoing increases” in the fed funds rate “will be appropriate” to curb the highest inflation the economy has dealt with in 40 years, Reuters reports.

“What we were seeing heading into this is buy the rumor, and now we are seeing a little bit of sell the news,” Robert Pavlik, Senior Portfolio Manager at Dakota Wealth Management, told Reuters. “It’s really going to be a focus on how many interest rate hikes are these Fed (officials) forecasting this year and how fast are they going to roll off the balance sheet.”