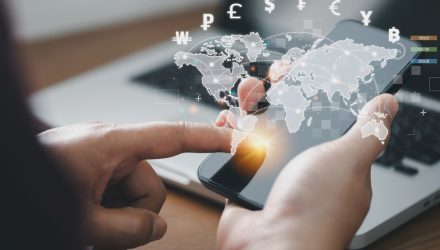 Emerging markets, like their U.S. brethren, are faltering this year, but sovereign debt issued by developing economies may rebound more rapidly than Treasuries while offering significantly higher levels of income.

With some market observers moderately bullish on emerging markets debt, investors may want to evaluate exchange traded funds such as the American Century Emerging Markets Bond ETF (AEMB). The actively managed fund turns a year old in June and is worth considering now due to a compelling geographic mix.

As BlackRock points out in a recent report, Latin American debt is an obvious source of strength this year, thanks in large part to rising commodities prices. Mexico, Colombia, Brazil, Panama, and Peru combine for 35% of AEMB’s geographic exposure. The fund holds 98 bonds.

“The good news: Many EM central banks were early in raising rates to try to rein in inflation. This approach has created compelling yield and currency valuations, in our view,” according to BlackRock.

Translation: AEMB could be a more fruitful near-term bond ETF idea because the Federal Reserve is just starting to raise interest rates while many emerging markets central banks already did so in a bid to stave off inflation. Additionally, this round of rate tightening by the Fed may not be as punishing on emerging markets bonds as previous tightening cycles were.

“How about the risk of the Fed’s upcoming rate hikes? This has often spelled trouble for EM assets. Investors have tended to demand a higher risk premium for holding them. Fed tightening also has frequently come with a stronger U.S. dollar, pressuring EM entities with hard-currency borrowings,” notes BlackRock. “We see the Fed’s impact as more limited this time. First, the Fed is rightly racing to normalize policy, but we believe it won’t fully deliver on its hawkish rate hike plans in the end. Second, we expect the sum total of rate hikes to be historically low given the level of inflation.”

Other advantages offered by AEMB include a relatively low weight to Asian debt — just 15% — and active management.

“It also means investors may need to go beyond indexes to get the exposures they are bullish on – and avoid the ones they have little confidence in. EM assets tend to offer fertile ground for security selection, we find, compared with heavily researched asset classes such as DM large-cap equities,” concludes BlackRock.