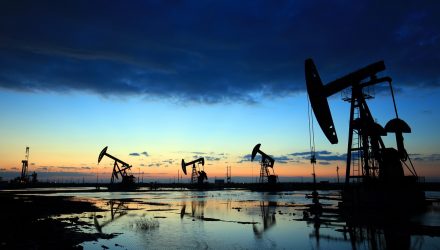 Oil and energy ETFs surged through the first four months of 2019, but that bullishness could be tested with the arrival of May. The fifth month of the year marks the start of the seasonally weak period for energy equities and crude itself.

Among the oil ETFs with a tendency of performing poorly in May and through the summer months is the Invesco DB Oil Fund (NYSEARCA: DBO). DBO is one of the largest oil ETFs trading in the U.S.

While the broader view of the oil market is encouraging, DBO’s weak seasonality is hard to ignore.

“Drilling down on a month-by-month basis over the past decade, DBO averages a negative return in each of the last eight months of the year — notably, a streak that includes the May-through-September gauntlet,” according to Schaeffer’s Investment Research. “What’s more, May and September have the lowest percentage of positive returns among all months, at 40%, while July and May tend to hit DBO with its third and fourth steepest average monthly declines of the year.”

The Memorial Day through Labor Day period is, historically, rough on DBO.

“Crude-price tracker DBO is the second-worst performing sector exchange-traded fund (ETF) over this summertime period, with only 40% positive returns and averaging a decline of 3.18%,” according to Schaeffer’s.

To be fair to DBO, four of the 10 worst-performing ETFs from Memorial Day through Labor Day are oil funds or have some fossil fuels exposure.