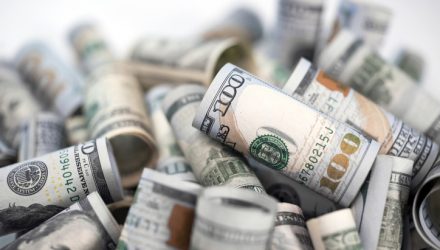 Heading into this year, there were plenty of calls for the dollar weaken, but with five months of 2019 almost in the books, the Invesco DB US Dollar Bullish (NYSEArca: UUP) is higher by 3.58% and some market observers believe the greenback can continue its ascent.

UUP, the largest exchange traded fund dedicated to tracking the dollar’s move against major currencies, seeks to establish long positions in ICE U.S. Dollar Index futures contracts with a view to tracking the changes, whether positive or negative, in the level of the Deutsche Bank Long USD Currency Portfolio Index — Excess ReturnTM over time, plus the excess, if any, of the sum of the fund’s Treasury Income, Money Market Income and T-Bill ETF Income over the expenses of the fund. The fund invests in futures contracts in an attempt to track its index. The index is calculated to reflect the changes in market value over time, whether positive or negative, of long positions in DX Contracts.

“The Dollar Index, a measure of the greenback against some of its most traded developed market peers, closed at 98.2030 on April 25, the highest level since May 2017, as global economic weakness and relatively high U.S. interest rates boosted the relative attractiveness of the currency,” according to S&P Global Market Intelligence.

Dollar strength comes even as the Federal Reserve has alluded to no more rate hikes for the rest of 2019 after initially forecasting two as it kept rates unchanged last month. The capital markets initially expected rates to remain steady after the central bank spoke in more dovish tones following the fourth and final rate hike for 2018 last December.

While the expectation was that the dollar would weaken this year, there have been plenty of catalysts to boost the greenback.

“U.S. economic outperformance has allowed the Federal Reserve to raise interest rates while central banks in other developed economies have kept them near zero or negative, increasing the relative attractiveness of U.S. assets,” according to S&P. “At the same time, uncertainty around the future direction of trade talks between the Trump administration and China, as well as issues such as Brexit weighing on rival economies, have bolstered the dollar as investors sought a safe haven to park their cash.”

As has been seen in the past, the strong dollar can be headwind for investors.

“While a strong dollar can provide some relief for consumers facing higher prices thanks to tariffs on Chinese goods, it is bad news for U.S. companies that rely on selling goods abroad as they usually have to either accept reduced margins or lower sales, depending on whether they cut prices to counter the currency’s strength,” notes S&P.