You are at:Home»Core Equity Channel»Why This Retail ETF Could Work Right Now 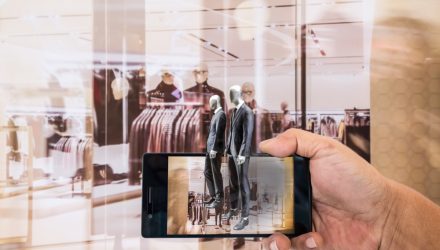 Why This Retail ETF Could Work Right Now

The consumer discretionary is taking a big hit due to the coronavirus outbreak, one that is further exposing vulnerabilities in some already fragile retail equities. That scenario could be good news for the ProShares Decline of the Retail Store ETF (NYSEArca: EMTY).

“As stores close and people isolate themselves, companies are bracing for a drop in consumer spending on discretionary categories including furniture and high-end apparel,” reports S&P Global Market Intelligence. “The outlook is looking particularly risky for certain retailers and consumer goods companies that were already struggling with issues like debt payments and slowing sales before the outbreak, according to analysts.”

Bolstering the case for EMTY is that 7,600 stores closed this year and by many accounts, that’s not nearly enough, indicating more closures could take place in 2020. Those closures could be hastened by a suddenly fragile economy and orders for people to stay inside due to the COVID-19 pandemic.

“While the U.S. government has not issued recommendations specific to retailers, guidelines released March 16 by the Trump Administration direct consumers to avoid eating and drinking establishments, including bars and restaurants, for 15 days. Trump’s guidelines also caution against unnecessary travel as well as gathering in groups of 10 or more,” according to S&P Global Market Intelligence.

One way of looking at that scenario is that even if the White House proceeds with giving all Americans an extra $1,000, that money is more likely to be spent online than it is in brick-and-mortar locations as long as the virus remains an issue.

Additionally, with markets fretting about companies’ ability to service debt, more indebted retailers, including some EMTY shorts, are viewed as vulnerable.

“Retailers and consumer goods companies with debt coming due, high leverage ratios and low cash flow are most susceptible to even a temporary slowdown, said Anthony Chukumba, a managing director at the equity division of Loop Capital Markets. Retailers with a higher proportion of discretionary merchandise are also more exposed, he said,” according to S&P Global Market Intelligence.