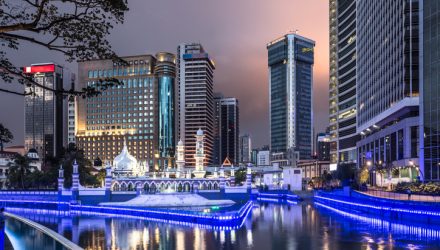 Why This EM Bond ETF is Still a Fine Idea

Emerging markets assets have been under some pressure amid the US/China trade spat, but with low bond yields around the world, debt issued by developing economies could be worth considering for income investors.

EMSH, which is higher by more than 2.5% this year, tracks the DBIQ Short Duration Emerging Market Bond Index. EMSH’s holdings are dollar-denominated, meaning those bonds stand to benefit as the U.S. dollar declines because financing that debt is easier when the dollar loses value.

While lower rates in the U.S. boost the case for EMSH, so do a spate of rate reductions throughout the developing world. Recently, central banks in Brazil, Mexico, and Thailand, just to name a few, have trimmed borrowing costs. Brazil and Mexico combine for nearly 16% of EMSH’s geographic exposure.

EMSH could be even more appealing if the U.S. dollar, which has been steady this year, weakens.

“Analysts say higher U.S. debt yields are detrimental to the governments of fast-growing emerging economies as they can spur additional gains in an ascendant greenback. A strong dollar and a weaker local currency not only makes it more expensive for a country to pay its debts, but it can also increase the cost of imports, thus fanning inflation,” according to MarketWatch.

Related: Why Emerging Markets Debt ETFs are a Solid Idea

EMSH is “designed to offer the attractive yield potential of emerging markets bonds with less interest rate sensitivity than a long-term bond fund,” according to ProShares.