You are at:Home»Core Equity Channel»Why Every Investor Should Own Hazardous Waste Stocks 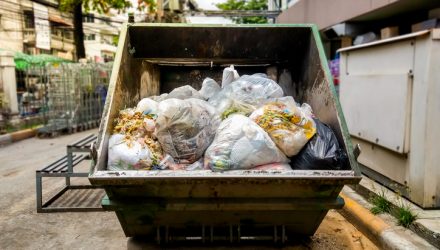 Why Every Investor Should Own Hazardous Waste Stocks

His name was Wayne Huizenga.

Wayne founded automotive retailer AutoNation. He was also instrumental in Blockbuster Video’s growth. He wisely sold his stake for $8.4 billion in 1994.

Waste Management is the largest trash collection, disposal, and recycling company in North America. It runs a very dirty but very profitable business.

I recommended shares of Waste Management back in July 2018. The stock has surged 36% since, crushing the 11.6% return for the S&P 500 over the same period: 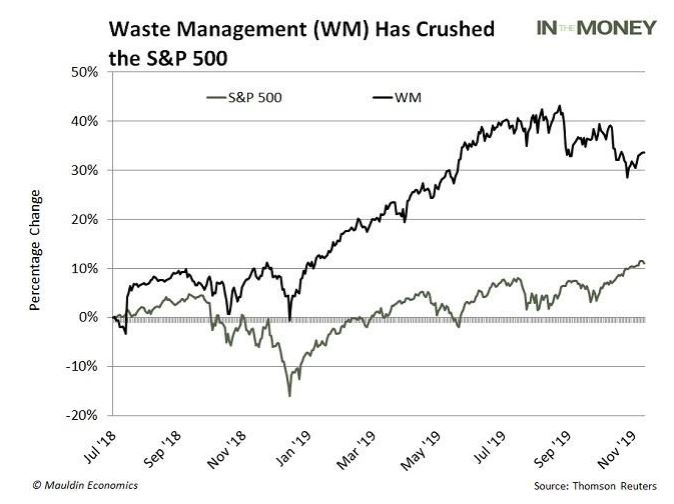 Waste Management has been on an incredible run. It’s climbed an average of 22% per year over the last five years. But it’s getting expensive. So I wouldn’t buy it right now.

The good news is it’s not the only player in the highly profitable trash industry.

Recycling Services Will Almost Double in the Next 5 Years

There are lots of reasons to hold trash stocks right now.

US GDP has been growing for 10 straight years: 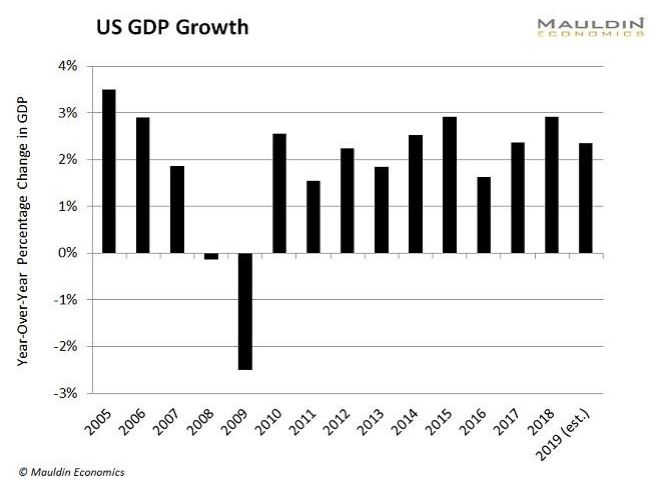 People have thrown away a lot of stuff during this period. And there’s no sign of that slowing down. According to the World Bank, US trash production will increase 25% by 2050.

That’s steady growth. But trash companies are also in the recycling business. And that segment of the industry is growing much faster. 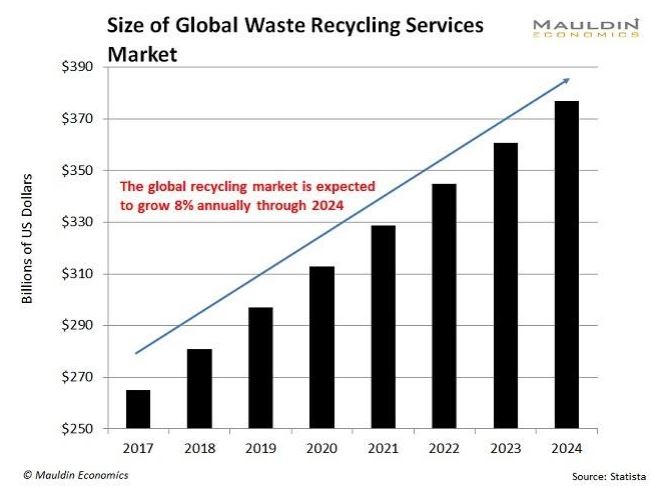 Trash is a highly regulated business.

Waste Management, for example, is the only company allowed to remove trash in the city of Chicago. So it has zero competition. It literally has a government-granted monopoly.

At the same time, trash contracts can last up to 125 years. That means two things. First, the companies that win these contracts are well established. Second, it’s nearly impossible for new companies to break in.

Trash is also a “sticky” business. Once customers sign up, there’s almost zero chance of losing their business.

Think about it: When was the last time you heard of someone switching trash companies? Probably never. This isn’t good for companies looking to break into the business. But it’s great for the established players.

This all translates into steady, predictable returns for investors.

These companies have raised their dividends for 12 straight years, on average.

That’s great news for dividend investors. But all three stocks are pretty expensive right now. So I recommend keeping them on your watchlist and focusing on an overlooked niche in the trash industry: hazardous waste.

The Best Opportunities in Trash

The global hazardous waste market is expected to grow 6% per year through 2027: