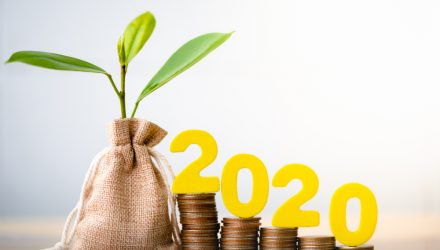 As we try to untangle the ongoing risks and position for the markets ahead, investors may turn to dividend growth exchange traded fund strategies to focus on quality exposure.

Specifically, Stovall pointed out that so-called Dividend Aristocrats, or companies with a long history of growing dividends, are high quality stocks or exhibit low systematic risks. Dividend Aristocrats show an average 0.92 beta, whereas all S&P 500 companies show a 1.13 beta. The market as a whole has a beta of 1. A beta greater than 1 suggests a stock or portfolio’s price is more volatile than the market, and a beta less than 1 indicates that its price is less volatile than the market.

The S&P 500 Dividend Aristocrats Index also has a lower debt-to-equity ratio of 75%, compared to the broader S&P 500 Index’s 93%. Stovall explained that a lower ratio is preferable since a high ratio would indicate that a company gets more of its financing through borrowing debt, which makes it exposed to higher risk of experiencing financial distress in case of a sustained earnings decline.

The high-quality focus may also help dividend growers outperform or do less poorly than the broader markets during weaker periods. We are also heading into the seasonally weak time of the year, or the May through October period that has historically been the worst six-month time span of the year. Since 2005, the S&P 500 has generated an average 3% return over the May through October months. However, the S&P 500 Dividend Aristocrats Index has returned an average of 3.7% over the same period.

Simeon Hyman, Global Investment Strategist, ProShares, also pointed out that dividends have been a powerful source of long-term returns. Dividends have added significantly to returns over time, contributing approximately 32% of the S&P 500’s total return since 1960. During the return-challenged 1970s, dividends made up nearly three-quarters of S&P 500 returns – while investors earned a cumulative total return of 77% from the S&P 500 in that decade, 60% of that 77% was from dividends.

Nevertheless, Hyman noted that the dividend strategy faces risks in the current market environment. In times of economic risk, income may shrink, and companies may increase savings or cut back on dividends. The recently passed CARES Act stimulus bill specifies that companies receiving federal assistance are prohibited from paying a dividend for a period of time. He added that in the United States, a legislative risk to dividends are encompassed by broader economic risk, not necessarily exacerbating it. So far this year, 72 S&P 500 companies have raised dividends, while 34 have eliminated dividends and 13 reduced payouts.

Kieran Kirwan, Director, Investment Strategy, ProShares, argued that investors should focus on consistent dividend growers that have displayed strong characteristics over time and under a wide variety of market conditions.

“Companies that have not just paid dividends, but consistently grown them over time have shown hallmarks of quality like stable earnings, solid fundamentals and strong histories of profit and growth,” Kirwan said. “Consistent dividend growers have captured more of the U.S. equity market’s gain with less of the loss.”

Investors can gain exposure to these quality dividend payers through the ProShares S&P 500 Aristocrats ETF (NOBL), which tracks the S&P 500 Dividend Aristocrats Index. NOBL is ProShares’ flagship dividend growth ETF strategy that targets the cream of the crop, only selecting components that have increased their dividends for at least 25 consecutive years. More than half of the companies in the index have over 40 years of consistent dividend growth, and 10 of them have grown dividends for more than half a century.

ProShares also offers dividend growth ETFs that focus on other market segments, like the ProShares Russell 2000 Dividend Growers ETF (SMDV) and the ProShares S&P MidCap 400 Dividend Aristocrats ETF (REGL) for those seeking quality dividend growers in the small- and mid-cap categories, respectively. The mid-cap Dividend Aristocrats Index, though, only requires 15 consecutive years of increased dividends for inclusion. SMDV, a dividend spin on the Russell 2000, the benchmark U.S. small-cap index, tracks the Russell 2000 Dividend Growth Index, which includes small-cap firms with dividend increase streaks of at least a decade.

Financial advisors who are interested in learning more about dividend investments can register for the Thursday, May 21, webcast here.