You are at:Home»Core Equity Channel»What Impact Do Elections Have on Markets? 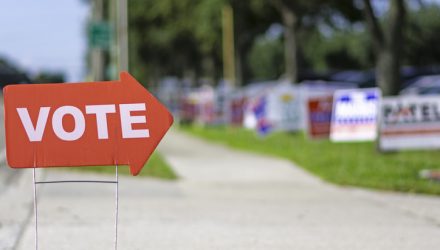 What Impact Do Elections Have on Markets?

Do elections move markets? In the short term, the answer is clearly yes. For the longer term, it depends more on the policies that are enacted, which in turn flow through to the economy and the business environment and, ultimately, to earnings.

As with almost anything in the stock market, there are patterns to be found. For example, years without federal elections have, on average, seen double-digit stock returns, while federal election years are generally weaker, according to Barron’s.1 For its part, a Charles Schwab study found that the S&P 500 returned 16.4 % on average in year three of the presidential term in the 16 presidential elections since 1950. That compares to 6.5% in the first year, 7% in the second and 6.6% in the fourth (upcoming) year.

When it comes to presidential election years, the market has climbed an average of 17.9% when a Republican was elected, versus a decline of -2.7% when a Democrat was elected, according to a recent Reuters story.2 But if this suggests that Republicans are always better for markets, consider this. In the inaugural presidential year (the first year of the president’s term), the market was up just 2.6% in a Republican administration compared to 22.1% for a Democratic administration, again according to Reuters.

As is often the case with the stock market, the period measured is everything. A day, a month, a year can make a huge difference. That same Reuters story is titled, “There’s No Preferred Political Party for Stocks,” and notes that “Folks often try to alter the data to prove their party’s superiority—but neither party is inherently better for stocks. Allowing your political beliefs to creep into your portfolio decisions can open you up to investing errors that can be increasingly costly over time.”

Of course, we live in a time when 280 characters and a Presidential Tweet can move markets, at least over the short term, so it’s easy to conclude that elections may matter more now than they did in the past. Certainly, the world of social media has made it easier to impact both stocks and bonds. But the practice is too new for its longer-term effect to be accurately assessed. So far, the lessons to be learned are the old ones: diversify your portfolio, create a plan, and don’t be distracted by short-term market moves.