You are at:Home»Core Equity Channel»Warren Buffett on His Successful Business Partnership with Charlie Munger 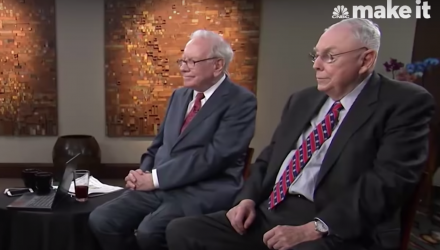 Warren Buffett on His Successful Business Partnership with Charlie Munger

Billionaire investor Warren Buffett recently sat down with CNBC’s “Make It” to share how his over 40-year-long business partnership with Charlie Munger all began, and how it’s been remained strong over the years.

Buffett and Munger grew up in Omaha, Nebraska, where they both worked at Buffett’s grandfather’s grocery store, although they did not work there at the same time. Many years later, a mutual acquaintance introduced the two to each other, when Buffett was 29 and Munger was 35. The two had dinner together and quickly became close.

“We went to dinner, and in five minutes, Charlie was rolling on the floor laughing at his own jokes, and I do the same thing, so we knew we were sort of made for each other.” After knowing each other for 60 years and working together for over 40 years, Buffett still says that he can “always learn something” from Munger.

Munger has long served as Buffett’s right-hand man in his role as vice-chairman of Berkshire Hathaway (BRK.A) (Buffett is the chairman and CEO). The two men began working together in 1978, when Munger left his own investment practice to join Berkshire Hathaway.