You are at:Home»Core Equity Channel»Warren Buffett Bets Big on Airlines 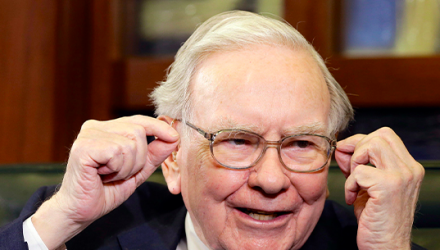 Ever on the hunt for a great bargain, billionaire investor Warren Buffett boosted his company’s stake in Delta Air Lines once again. Berkshire Hathaway acquired some 976,000 Delta shares last week for roughly $45.3 million, according to a filing on Monday, raising its total holdings to 17.9 million shares. This was enough to bring Buffett’s ownership of the U.S. long-haul carrier up to more than 11 percent.

Once a critic of airline stocks, Buffett has become one of their greatest champions, noting the industry’s strong fundamentals and the fact that it’s protected by an economic moat.

Accumulating shares now appears to be a strategic move to capitalize on lower fuel costs—Brent crude oil is down 30 percent so far this year—as well as coronavirus-impacted travel, which has depressed airline stock prices.

Buffett isn’t alone in thinking airlines look like a steal right now. In a note to clients this week, Citigroup analyst Stephen Trent maintained his Buy ratings on Delta, United Airlines and Spirit Airlines, writing that “if coronavirus concerns fade in the coming weeks and the U.S. is able to avoid recession, this scenario could see a recovery in ex-Asia demand, which could lead airline stock prices and earnings streams to stabilize.”

What’s more, the domestic airline industry could soon receive fiscal stimulus in the wake of the COVID-19 epidemic. Speaking to various business news networks on Friday, National Economic Council director Larry Kudlow hinted that the U.S. government is considering “timely and targeted micro-measures” for certain industries, including airlines, hospitality and agricultural. It’s unclear at the moment what those measures might look like.

Kudlow ruled out a large-scale economic stimulus package similar to the one passed in response to the global financial crisis, calling the idea a “budget buster.”

Airline Stocks on Sale, Most Discounted Since 9/11

As one the most exposed industries to global travel disruptions, airlines have seen a deeper selloff than the market and now look like an attractive bargain.

So far, COVID-19 has had a far greater impact on global airline stocks than the 2002-2003 SARS epidemic did. The chart below shows the daily percent change of the NYSE Arca Global Airlines Index starting on the day of the first reported incident of either infection—November 15, 2002 in the case of SARS, December 31, 2019 in the case of COVID-19. Airline stocks found their bottom on the 77th trading day into the SARS epidemic, down approximately 25 percent. They exceeded that level in close to half the time during the COVID-19 outbreak, falling 25.72 percent on the 42nd trading day. Airlines were off about 30 percent as of Thursday’s close.

Obviously there are multiple factors investors should consider, including time period and asset class, but as a general rule, when the RSI falls below 30, it’s been a good buy signal, and anything below 20 has been a screaming buy. Buffett presumably knew this before the rest of us.

Is More QE on the Way?

We may not get a huge spending package, but don’t rule out quantitative easing (QE). You can see the amount of money printing the Federal Reserve had to do in the days following the 2008 crisis. The U.S. monetary base, or the overall total circulation of money, exploded from just under $1 trillion pre-crisis to as much as $4 trillion at its peak in mid-2014.

The Fed is unlikely to print money to combat the economic impact of the coronavirus, according to Cornerstone Macro’s Melissa Turner, but it may have to do more QE.

“In that case,” Turner writes, “something on the order of $500 billion to $1 trillion is probably what the Fed will do.”

Earlier in the week, the Fed lowered the interest rate 50 basis points in its first emergency meeting since the crisis more than 10 years ago. The Fed has cut rates between regularly scheduled policy meetings only six times since 1998, and in each instance, it cut rates again at its next meeting—March 17, in this case.

“We will see short rates headed toward zero,” the billionaire said on CNBC’s “Halftime Report. “I’m in the camp that the Fed is going to cut rates again.”

He’s not wrong. Today the nominal yield on the 10-year Treasury plunged below 0.7 percent for the first time ever as investors sought shelter from the equity selloff. This had the effect of lifting gold prices up nearly 8 percent for the week, its best weekly advance since 2008. The yellow metal’s next test is $1,700 an ounce.

There could be other deals than airline stocks for bargain hunters. On Monday, the S&P 500 Index touched 20 on the RSI, only its seventh time to do so since the turn of this century. According to CLSA, stocks have historically been up 86 percent of the time 10 trading days following these conditions. That would put us at March 16 if we’re using March 2 as day one. We’ll see then if the probability holds.

“We expect the impact of COVID-19 to be temporary and mitigated by broad policy stimulus, even as the virus spread is proving more severe than anticipated,” wrote bank analysts in a note. They explained that they had previously been trimming risk from their portfolios over the past couple of months, but now they see “the risk-reward as increasingly skewed to the upside for risky assets and use the current pullback to add back to cyclical exposures at the margin.”

The risk may be too high for some investors, in which case I recommend gold as a diversifier. I like to advocate the 10 Percent Golden Rule, with 5 percent of your portfolio in gold bullion (coins, bars, jewelry), the other 5 percent in high-quality gold stocks, mutual funds and ETFs.

Think gold could hit $10,000 an ounce? Find out why it could by clicking here!

The Economy and Bond Market

U.S. Global Investors, Inc. is an investment adviser registered with the Securities and Exchange Commission (“SEC”). This does not mean that we are sponsored, recommended, or approved by the SEC, or that our abilities or qualifications in any respect have been passed upon by the SEC or any officer of the SEC.

This commentary should not be considered a solicitation or offering of any investment product.

Certain materials in this commentary may contain dated information. The information provided was current at the time of publication.

Some links above may be directed to third-party websites. U.S. Global Investors does not endorse all information supplied by these websites and is not responsible for their content.

Holdings may change daily. Holdings are reported as of the most recent quarter-end. The following securities mentioned in the article were held by one or more accounts managed by U.S. Global Investors as of (12/31/2019):

The Bloomberg World Airlines Index is a capitalization-weighted index comprised of global airlines. The Bloomberg Galaxy Crypto Index is a market capitalization-weighted index that tracks the performance of the largest cryptocurrencies traded in USD. The NYSE Arca Global Airline Index is a modified equal- dollar weighted index designed to measure the performance of highly capitalized and liquid international airline companies. The Index tracks the price performance of selected local market stocks or ADRs of major U.S. and overseas airlines. The relative strength index (RSI) is a momentum indicator that measures the magnitude of recent price changes to evaluate overbought or oversold conditions in the price of a stock or other asset. The RSI is displayed as an oscillator (a line graph that moves between two extremes) and can have a reading from 0 to 100. A monetary base is the total amount of a currency that is either in general circulation in the hands of the public or in the commercial bank deposits held in the central bank’s reserves. This measure of the money supply typically only includes the most liquid currencies; it is also known as the “money base.” There is no guarantee that the issuers of any securities will declare dividends in the future or that, if declared, will remain at current levels or increase over time. The S&P 500 Low Volatility Index measures performance of the 100 least volatile stocks in the S&P 500. The index benchmarks low volatility or low variance strategies for the U.S. stock market. The Korean Composite Stock Price Index (KOSPI) is the main tracking index in South Korea. The SET Index is a Thai composite stock market index which is calculated from the prices of all common stocks (including unit trusts of property funds) on the main board of the Stock Exchange of Thailand (SET), except for stocks that have been suspended for more than one year. Sensex, otherwise known as the S&P BSE Sensex index, is the benchmark index of the Bombay Stock Exchange (BSE) in India. Sensex comprises 30 of the largest and most actively-traded stocks on the BSE, providing an accurate gauge of India’s economy. The FTSE Straits Times Index (STI) is a capitalization-weighted stock market index that is regarded as the benchmark index for the Singapore stock market. It tracks the performance of the top 30 companies listed on the Singapore Exchange.