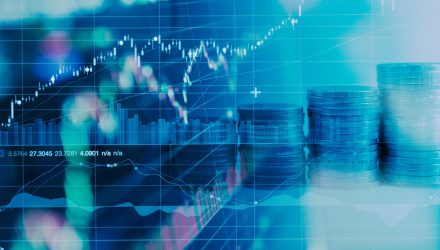 The iShares S&P 500 Value ETF (NYSEArca: IVE), one of the largest exchange traded funds dedicated to value stocks, posted an admirable first-quarter gain of more than 11%. That could be a sign that a long-awaited value resurgence is materializing.

Recent dovish commentary from the Federal Reserve weighed on value stocks and the related ETFs.

“Immediately after the Fed’s announcement, value stocks—the market’s cheapest—were crushed,” reports Evie Liu for Barron’s. “The valuation spread between the market’s cheapest stocks and the most expensive ones has risen to the widest level in the past 70 years. Investors took the hint. Outflows from value ETFs have accelerated sharply after the Fed’s dot plot update.”

Popular value ETFs include the iShares MSCI USA Value Factor ETF (Cboe: VLUE). VLUE “seeks to track the performance of an index that measures the performance of U.S. large- and mid-capitalization stocks with value characteristics and relatively lower valuations, before fees and expenses,” according to iShares.

VLUE is trailing the aforementioned IVE this year. Some market observers, including Bernstein strategist Sarah McCarthy, see value stocks can bounce back over the medium term.

“McCarthy argues that value stocks’ pullback after the Fed announcement mostly came from the financial sector, which makes part of its revenue from lending money,” reports Barron’s. “If interest rates remain low for an extended period, financial companies will suffer. Excluding financials, value stocks actually haven’t been punished that much.”

The spreads between the most expensive and least expensive sectors are widening, but that scenario is not being caused by slack fundamentals in the latter group.

“At the same time, although the value spreads between the most expensive and the cheapest stocks have been widening, the gap between the two groups’ growth rates hasn’t expanded much,” notes Barron’s. “This means that value stocks’ cheaper prices are not justified by worsening fundamentals, leaving hope for them to rise when the time is right.”

Have you signed up for the ETF Trends Virtual Summit on Wednesday, April 17? It’s complimentary for financial advisors (earn up to 5 CE Credits)! Register now to learn about smart beta and factor strategies for a late stage market cycle.