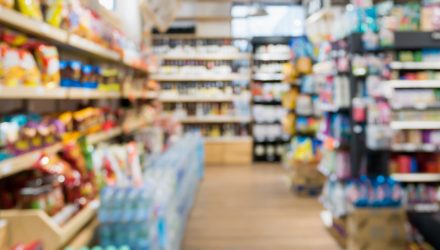 Some sectors are known for dividends and payout growth more than others. Investors looking to access a basket of dividend growers via an ETF should evaluate those funds’ sector weights.

NOBL allocates less than 3.50% of its combined weight to the high-yielding real estate and utilities sectors, but yield movement in some other sectors can provide some insight regarding NOBL’s recent price action. The fund is up almost 13% this year and is up 20.71% off its December lows.

“The yield on consumer staples stocks, traditionally a big dividend payer, reached nearly 3% late last year, but it has retreated since to a recent 2.87%,” reports Lawrence C. Strauss for Barron’s. “Those stocks have a one-year return of about 10%, as companies like PepsiCo (PEP) and Procter & Gamble (PG) have delivered good results.”

Consumer staples is NOBL’s second-largest sector weight at 21.81%, according to ProShares data.

“The yield on materials stocks, a highly cyclical sector, has increased about 20 basis points, or one-fifth of a percentage point, to 2.24%. The sector’s one-year return is flattish, indicating concerns about economic growth and commodity prices,” according to Barron’s.

The cyclical materials sector is the fourth-largest sector allocation in NOBL at a weight of 11.10%. Another sector with some interesting yield action is financial services. Shares of bank stocks are surging this year, but the group’s yield is higher today than it was a year ago due in part to dividend increases throughout the sector.

“Many financial stocks, particularly banks, have struggled amid concerns about slowing economic growth and the specter that the Federal Reserve will cut short-term rates after a long easing regimen,” reports Barron’s. “That would put pressure on banks’ net interest income—the difference between what they earn on their assets, like loans, and pay on their liabilities, mostly deposits.”