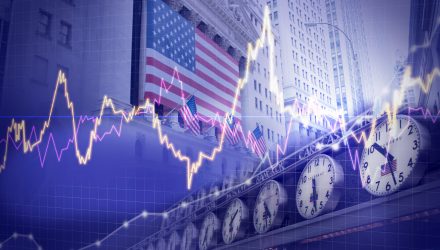 U.S. markets and stock ETFs barely pushed into positive territory after the latest figures revealed the U.S. economy expanded at a decent rate but the enthusiasm was dampened by some prominent earnings misses.

The Commerce Department stated gross domestic product increased at a 3.2% annualized rate over the first quarter on a smaller trade deficit with exports on the rise and the largest accumulation of unsold goods since 2015, Reuters reports.

“We had a pretty big beat on GDP today, but some underlying numbers are giving investors a pause on where they see future growth coming from given the consumer spending levels,” Mike Loewengart, vice president of investment strategy at E*Trade Financial, told Reuters.

Analysts also pointed out that inflation remained muted in the first quarter, which should keep the Federal Reserve from straying on its new path of patience over its monetary policies ahead.

“They seem to be well justified in waiting, and there’s not a lot of pressure on them to change their position,” Steven Violin, a portfolio manager at F.L.Putnam Investment Management, told the Wall Street Journal. “That reinforces some optimism.”

However, some earnings disappointments kept markets from breaking out on Friday.

“Earnings have largely been good, but there have been some misses, which investors are trying to make sense of and that’s why we have this sideways move in markets,” Loewengart added.

Additionally, Exxon Mobil (NYSE: XOM) retreated after the company revealed a quarterly profit miss on lower oil and gas prices and weakness across its businesses.