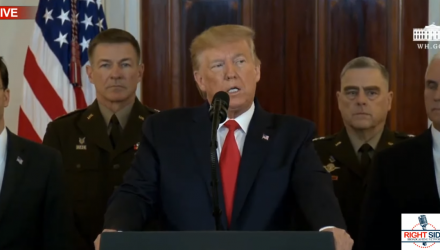 U.S. markets and stock ETFs jumped Wednesday on hopes of de-escalating tensions in the Middle East after Iran revealed signs of an end to hostilities, following retaliatory missile strikes on U.S. military compounds in Iraq.

Tehran’s military response to the U.S.’s airstrike of a key Iranian general sent overnight markets reeling, but the initial selloff was pared back as investors reevaluated the lower likelihood of an extended conflict, the Wall Street Journal reports.

Easing market fears, Iran’s foreign minister stated they had executed “proportionate measures in self-defense” and did not want to escalate the conflict. President Donald Trump also revealed that no American or Iraqi lives were lost, adding that the U.S. was “ready to embrace peace with all who seek it.”

Trump tweeted that “All is well!”, which helped support markets in positive territory. “The fact that we have this great military and equipment, however, does not mean we have to use it,” Trump said at a White House briefing Wednesday, Reuters reports.

“The de-escalation nature of the speech is really what the market is focused on,” Michael Antonelli, market strategist at Robert W. Baird, told Reuters. “It’s Trump essentially saying that we’re not going to retaliate to the missile attacks last night.”

Market participants hoped that this was only a one time event or blip in the ongoing bull market rally as we ready for the quarterly earnings season.

“The balance of market opinion is that this could be a one-off and the situation may well settle down,” Philip Shaw, chief economist at Investec, told the WSJ.

“Geopolitics become noise to markets until it becomes more serious,” Kit Juckes, a macro strategist at Société Générale, told the WSJ. “This view is borne of experience—history says that we avoid major escalations.”