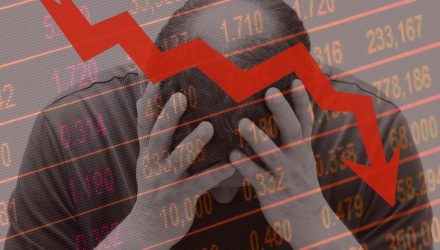 U.S. markets and stock exchange traded funds plummeted Monday, despite the Federal Reserve’s attempts to bolster the economy by lowering benchmark rates to zero and injecting the system with more stimulus, as the coronavirus outbreak disrupts daily life in America and adds to fears of a recession.

The precipitous decline in the equity markets reflect growing fear since the novel coronavirus, or COVID-19, disrupted supply chains, impeded the workforce and infected tens of thousands of people. In an attempt to mitigate the fallout, central banks and governments have enacted several stimulus measures, but it does not seem to be enough to bolster investor confidence.

“This is what panic looks like,” Patrick Healey, president and founder of Caliber Financial Partners, told the Wall Street Journal. “It doesn’t matter what the Fed did over the weekend, or what they could have done, the trading activity in the market is reflective of fear and uncertainty.”

Over the weekend, the Federal Reserve revealed several measures to support the economy, such as slashing its benchmark interest rate to near zero, its second emergency rate cut this month. Additionally, the central bank promised to buy $700 billion in Treasuries and mortgage-backed securities, reduce the rate charged to banks on short-term emergency loans, and activate swap lines with five other central banks.

Market observers are worried that the central banks are doing too much too soon, which will leave central banks with limited options should conditions worsen.

“It’s basically using up all their ammunition within a three-week span,” Terence Wong, chief executive of Azure Capital, told the WSJ. “There’s nothing left. They can’t use monetary loosening as part of their arsenal anymore.”