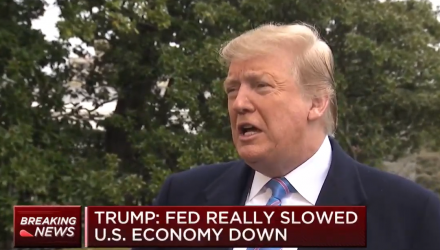 Trump: Economy Would Take Off “Like a Rocket Ship” if Fed Cuts Rates

U.S. President Donald Trump reiterated his disdain for rising interest rates on Friday, saying that the economy would take off “like a rocket ship” if the Federal Reserve cuts interest rates. Furthermore, he added that the central bank is impeding economic growth in the U.S. and has “really slowed us down.”

Last month, the Federal Reserve elected to keep rates unchanged, holding its policy rate in a range between 2.25 percent and 2.5 percent. In addition, the central bank alluded to no more rate hikes for the rest of 2019 after initially forecasting two.

With regard to Trump’s comments on quantitative tightening, the Fed has been alluding to more flexibility with its holdings of Treasuries and mortgage-backed securities. The central bank has been on a path towards a reduction in assets, which would come prior to the end of 2019.

Related: Will the ‘Fed Put’ Work on the Next Go-Around?

Trump’s comments come as job growth in March returned after a weak February as 196,000 jobs were created as opposed to 175,000 expected by economists, which eased recession fears on Friday.

Furthermore, data released by the Labor Department on Thursday revealed that jobless claims in the U.S. hit a 49-year low, suggesting that the labor market is still strong despite fears of a global economic slowdown.