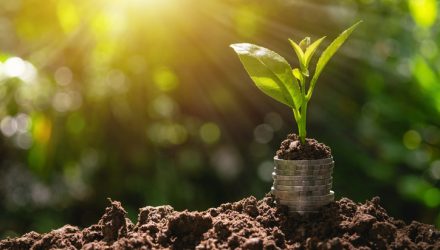 This Financial ETF Could be Fun in October

The Financial Select Sector SPDR (NYSEArca: XLF), the largest financial services ETF, has traded slightly higher this month and there is a slew of looming events that could make an XLF an interesting, potentially volatile play over the next several weeks.

XLF “jumped 0.4% on Sept. 18 — the day of the Fed’s September rate cut — before embarking on a two-day losing streak. The shares have since strung together three straight weekly losses, and are down another 1.6% since last Friday’s close to test support at their 200-day moving average, last seen at $27.02,” according to Schaeffer’s Investment Research.

Adding to the near-term intrigue surrounding XLF is third-quarter earnings season, which will start in earnest in a few days. The financial services sector is the group that gets earnings season rolling, meaning a slew of big-name XLF components will soon be stepping into the earnings confessional.

“Short-term XLF options traders have rarely been as put-skewed as they are now, per the fund’s Schaeffer’s put/call open interest ratio (SOIR) of 3.37, which ranks in the 99th annual percentile,” notes Schaeffer’s. “The October 25 and 27 puts are home to peak front-month open interest, and data suggests the two strikes may have been used in early September to initiate a long put spread. If this is the case, the spread strategist expects XLF to settle right at $25 at the close next Friday, Oct. 18.”