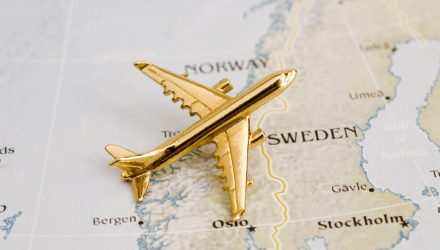 The Optimist’s Guide to Airlines, Crypto Mining and Gold

“Travel,” Mahatma Gandhi once said, “is the language of peace.”

If that’s the case—and I happen to believe that it is—then I’m extremely bullish about the future, especially with respect to U.S.-China relations. Last week I was in Lower Manhattan, and the number of Chinese tourists I observed visiting the New York Stock Exchange (NYSE) and Federal Hall National Memorial—the epicenter of American capitalism and birthplace of the U.S. government—was encouraging. Everyone wanted their picture taken with the statue of George Washington, the father of the country with which their own government has been locked in a trade war for more than 18 months now.

The trade war’s days may be numbered, however. Both sides of the skirmish reached a partial agreement last Friday, laying the groundwork for Presidents Donald Trump and Xi Jinping to sign a trade deal later this year.

Tourism has traditionally helped peace and understanding spread across borders, and I’m hopeful that it will do the same today. It’s also good for commerce, especially for airlines and the travel industry in general, as I told CNBC Asia last Thursday.

Delta Air Lines, in particular, had a phenomenal third quarter as we head into the fourth, and historically most profitable, quarter. The carrier reported the best sales in company history as well as impressive earnings per share of $2.32, a 29 percent increase over the same period last year. CNBC reports that Delta is hiring as many as 12,000 new employees—including pilots, flight attendants and ground staff—through 2020 to meet surging demand.

Supporting this growth are rising ancillary fees. Those are the non-ticket fees and upgrades you may end up having to pay when you fly, for everything from meals to preferred seating to credit cards. Delta recently inked a new deal with American Express, which is forecast to generate a mind-boggling $7 billion in revenue for the carrier by 2023, up from $3 billion today.

But Delta’s not the only one that’s joined the party. In the chart below, you can see a comparison of the amount of ancillary fees select U.S. airlines collected in 2018, on a per-passenger basis, with what they collected a decade earlier. Low-cost carrier Frontier saw an unbelievable 1,187 percent jump in such fees, while Spirit topped the list with an average $50.94 per passenger. 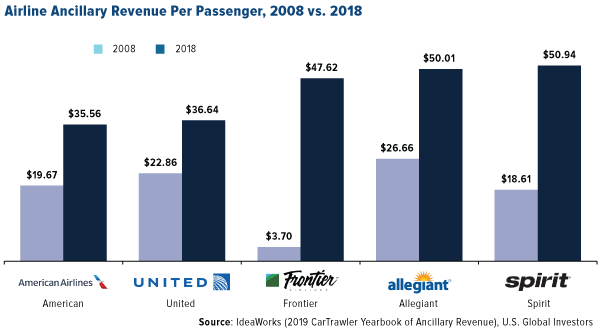 If you’re not participating, now might be a good entry point. The busy Thanksgiving and Christmas travel seasons are fast approaching, and according to recent analysis by the Wall Street Journal, the fourth quarter has typically seen the highest returns, with shares rising 8 percent on average every period going back to 1990.

Another company that reported a spectacular third quarter was HIVE Blockchain Technologies, which is back to generating positive net income and cash flow. In case you’re unaware, I’ve been serving as HIVE’s interim executive officer. After having to defend ourselves against a proxy battle in the spring, we’re now benefiting from improved transparency and financial controls. What’s more, we expect continued improvements throughout the fiscal year.