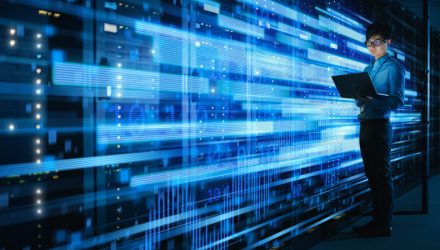 It wasn’t that long ago that the idea of technology sector dividends seemed like a far-flung concept, but the group’s dividend profile has dramatically improved over the past decade and some ETFs, including the ProShares S&P Technology Dividend Aristocrats ETF (CBOE: TDV), are keeping up with that evolution.

The newly minted TDV is the second fund of its kind, but the first with an explicit dividend increase streak mandate. That new ProShares fund follows the S&P Technology Dividend Aristocrats, which requires member firms to have payout increase streaks of at least seven years.

This year, only the healthcare sector at 10% is expected to outpace the 9% dividend growth offered by technology. Technology and healthcare are the top two sector allocations in the S&P 500. TDV is reflecting some of those expectations as highlighted by a gain of almost 4% over the past month.

“IHS Markit, a financial data firm, expects U.S. dividends paid out to total a record $663 billion this year, up 7.2% from 2019’s levels—but below the 7.9% gain the previous year,” reports Lawrence Strauss for Barron’s. “That 2020 estimate, which excludes special dividends, covers the entire U.S. stock market, including the S&P 500.”

The payout ration on the S&P 500 is 35 percent, but for technology, that number falls to 30%. Only three sectors – communication services, financial services, and healthcare – have lower payout ratios, indicating the dividend growth trajectory for TDV components is potentially compelling.

Technology companies historically did not pay out dividends since it would hint that the firm didn’t have anything new to reinvest in to further support their breakneck growth. While this growth-oriented model has worked over the years, the market environment has shifted.

Microsoft is a member of TDV’s roster, but Apple hasn’t qualified for admission to the fund yet. Given its commitment to growing dividends, it’s just a matter of time before TDV welcomes Apple into its exclusive dividend growth club.