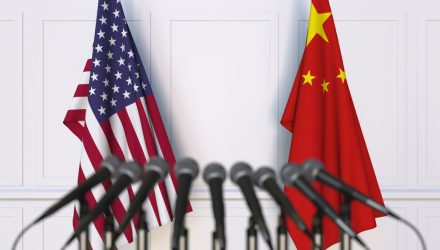 U.S. markets and stock exchange traded funds slightly pared back gains mid-Wednesday after the United States and China signed the long-awaited Phase 1 trade deal that would roll back some of the tariffs at the height of the trade war.

President Donald Trump, U.S. officials and Chinese delegates convened at the White House in a signing ceremony mid-Wednesday, the Wall Street Journal reports. While the full details of the initial trade pact were not released, Washington was widely expected to suspend any previously planned tariff hikes on Chinese imports in exchange for Beijing’s promise to increase orders on a range of U.S. products.

The administration, though, remains in an uphill battle over technology and intellectual property rights, with a focus on tightening restrictions on telecom giant Huawei Technologies.

The pullback in the market from the mid-day highs may reflect disappointment in the phase-one deal, which some analysts argued was a compromise measure.

President Trump “wants the U.S. economy to be humming along going into the presidential election,” Lyn Graham-Taylor, fixed-income strategist at Rabobank, told the WSJ. “But on the flip side, he doesn’t want to be seen as weak on China, so he is doing a balancing act.”

Meanwhile, the markets were closely watching the first week of U.S. corporate earnings season as strong earnings growth will be key in maintaining the stock market rally and elevated valuations.

“You need to justify valuations, and for that you need a strong earnings season,” Philip Blancato, president and CEO Ladenburg Thalmann Asset Management, told the WSJ.

Financial stocks pulled back after the latest disappointing round of big bank earnings from Bank of America, U.S. Bancorp and Goldman Sachs. Additionally, Target plunged after revealing poor holiday sales.