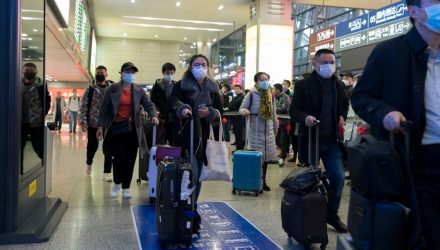 U.S. markets and stock exchange traded funds paused the record-setting rally on Thursday as investors refocused on coronavirus fears in response to a sudden spike in number of new reported cases across China.

The markets suffered from another bout of risk-off selling in early Thursday after Chinese officials revealed the number of newly confirmed infections in Hubei jumped almost 10-fold overnight, adding to fears of protracted economic weakness in China, the Wall Street Journal reports.

The updated number of newly confirmed infections climbed to 14,840 Wednesday, compared to a new count of 1,638 a day prior, after the provincial health commission began to include clinically diagnosed cases, along with those showing a positive laboratory test.

The rising number of cases has prompted “renewed concern around the dynamics of the coronavirus,” James McCormick, a strategist at NatWest Markets, told the WSJ. “Having had several days of relative calm, it’s a bit of a wake-up call that this process is probably going to go on for quite some time.”

McCormick argued that the recent run up in equities reflected investors growing “a bit complacent” as the number of new cases appeared to have slowed.

“The surge in reported cases today is a one-off change due to methodology and by itself, doesn’t imply an acceleration in the pace of infection,” Seema Shah, chief strategist at Principal Global Investors, told Reuters. “However, if the change in methodology does result in a rise in the growth rate of reported cases, market sentiment will inevitably deteriorate.”

The markets weakened because of growing fears that the virus outbreak will drag on the global economy. Analysts warned that disruption to business and travel in China could affect the American economy. The dip in tourism and slowdown in exports to China could drag down annualized U.S. growth by half a percentage point in the first quarter, according to economists at Goldman Sachs Group.