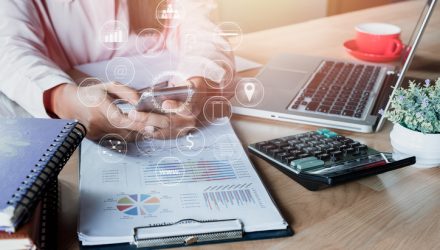 In an environment of falling interest rates, concerns over a global slowdown and rising risks in financial markets, the banking sector has been among the worst performers this year. Exchange traded fund investors, though, can look to a strategy that captures U.S. market exposure without the exposure of a weakening financial segment.

However, the lower rate outlook has weighed on banks since they can’t make as much money from lending at lower rates.

“If a [half percentage-point]cut in September were to occur it would set up the sector for a particularly weak Q4,” analysts at UBS Group AG said in a recent report, adding that bank stocks could begin to look attractive again by mid-2020 if yields don’t continue to fall.

The fall in yields as a response to heightened global risk and a lower interest rate outlook have even raised the prospects of negative rates if conditions continue to deteriorate, similar to what has already occurred in some European countries. Not surprisingly, European banks have also taken a beating in response to their negative rate environment.

Looking at SPXN’s holdings when compared to the S&P 500, the ex-financial ETF, like the name suggests, holds 0% in financial sector names, but would overweight other sectors instead. For instance, SPXN includes a 25.6% tilt toward information technology, 17.0% to health care and 12.2% to consumer discretionary, compared to the S&P 500’s 21.4% information technology, 14.2% health care, 13.1% financials and 10.2% consumer discretionary.