You are at:Home»Core Equity Channel»Rosy Forecasts Emerge For European Stocks, Benefiting This ETF 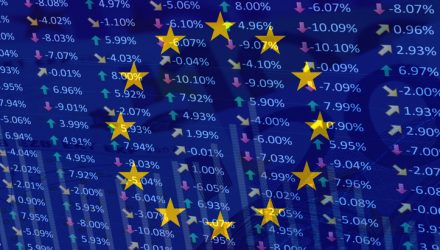 Quiet as it has been kept, European stocks are soaring this year and the ProShares MSCI Europe Dividend Growers ETF (CBOE: EUDV) is one of the related ETFs residing near record highs.

EUDV tracks the performance of the MSCI Europe Dividend Masters Index, which consists of at least 25 European companies that have consistently increased their dividends for at least 10 consecutive years. For investors that feel as though they have missed, there’s good news as some forecasts are projecting more upside ahead for European stocks.

“The Stoxx Europe 600 Index closed at a historical peak last week after earnings optimism outweighed spreading coronavirus fears,” reports Bloomberg.“To JPMorgan strategists, the fact that the European benchmark has risen above the level of 400 index points by about 8% is significant because in prior years a gain above this level was followed by months of heavy declines.”

According to the Global Funds 2020 Positioning Themes report compiled by Copley Fund Research, global fund managers now have the biggest overweight position in European stocks on record while including the least amount of exposure to emerging markets in six years relative to a benchmark.

Specifically, Copley found that the overweight to developed European stock markets touched a new high of 8.83% at the start of 2020. All major European countries and sectors showed an overweight positioning, led by the U.K., Germany and Switzerland. Those three countries combine for over 53% of EUDV’s geographic exposure.

“Unlike in the past, Eurozone manufacturing is starting to rebound, providing a favorable basis for a further advance in stocks. Additionally, just 23% of the Stoxx 600 companies and four country indexes are currently trading at record highs, leaving room for the rally’s expansion,” according to Bloomberg.

“JPMorgan strategists raised euro-zone stocks to overweight at the end of September, correctly forecasting the continuation of gains, which have since reached about 9%. The analysts are underweight U.S. and U.K. equities and overweight euro-zone stocks,” according to Bloomberg.

EUDV, which holds 56 stocks, has a price-to-book ratio of 2.53x and a distribution yield of 2.26%, implying ample room for dividend growth, according to ProShares data.