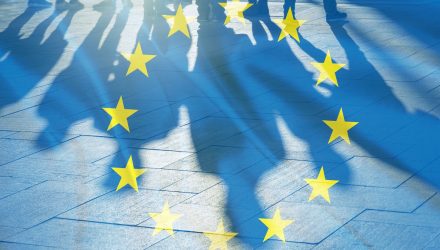 Are Risks Abound for Europe ETFs?

The iShares MSCI EMU ETF (CBOE: EZU) is up 11.54% year-to-date and while that fund and rival Eurozone exchange traded funds are trading higher, the region faces significant political risks that could potentially weigh on financial markets there.

“We expect euro-zone growth to pick up in the second half of this year. But the risks around our favorable base case are considerable – and they are mainly tied to potential political troubles,” said BlackRock in a recent note.

The Organization for Economic Cooperation and Development previously cut its forecast for Eurozone growth this year to 1%, from a 1.8% estimate back in November.

Risks To Consider in Europe

“The UK has bought more time to hammer out a Brexit agreement, but uncertainty remains,” said BlackRock. “There may be renewed escalation of the trade tensions between the U.S. and EU, centered around car tariffs. U.S. President Donald Trump has until May 18 to decide whether to take action against European car producers on national security grounds. And European Parliament elections in late May could result in a populist sweep of protest parties from both ends of the political spectrum. This would further erode the influence of pro-European centrist political forces.”

Foreign investors also lost interest as the euro currency depreciated to a 22-month low against the U.S. dollar, which diminishes U.S. dollar returns. However, the weaker currency does make Europe’s export industries more competitive on the world stage.

“We believe the ECB should pause further steps towards policy normalization for the remainder of this year – and likely beyond – to ensure a return of inflation to its below-but-close-to 2% price stability objective,” said BlackRock. “At the upcoming meetings, the Governing Council will set the conditions for further long-term loans to banks (TLTRO3), discuss tiering of reserves and review its monetary stance.”