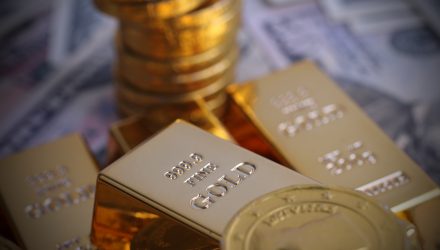 Even as stocks stumbled Monday, the SPDR Gold Shares (NYSEArca: GLD), the world’s largest gold ETF, and rival gold funds closed modestly, extending losses accrued over the past week. During that time, GLD is lower by more than 3%, a decline that is prompting some investors to reduce exposure to the bullion-backed ETF.

Gold bulls in particular see momentum after the Federal Reserve officials hinted at a more dovish stance on interest rates for this year. According to Fed fund futures, options traders were betting on a 9% chance rates will fall this year and 91% are betting on an unchanged interest rate outlook. However, investors are embracing riskier assets, eschewing gold in the process.

“The $33 billion SPDR Gold Shares ETF, or GLD, saw a net withdrawal of $496 million on Friday, the most in a single day since February 2018. That pushed the five-day total to $720 million, marking the fourth consecutive week of outflows,” reports Bloomberg.

As the market environment shifts, some analysts believe that the depressing influences on gold that occurred during the before the last quarter of 2018 will not likely be repeated in 2019. Furthermore, gold will see continued investment demand among the emerging markets, along with increased demand for safe-haven plays across developed markets.

Related – Analyst: Only The Fed Could Kill Gold Now

“Investors are weighing the prospect of a trade deal that could lift most or all U.S. tariffs, boosting risk appetite and dimming the appeal of havens,” reports Bloomberg. “Commerzbank AG analysts including Carsten Fritsch attributed flows out of GLD and a dip in bullion prices below $1,300 an ounce to ‘good sentiment’ in a research note.”

According to the World Gold Council, gold-backed exchange traded funds saw almost 72 tons of inflows in January, exceeding their total for all of 2018, as investors continued to dive into gold investments.