You are at:Home»Core Equity Channel»Regulatory Risk Eases a Bit For Healthcare ETFs 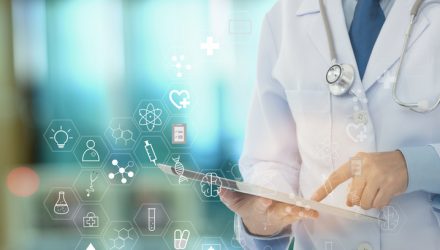 The SPDR Health Care ETF (XLV), the largest healthcare ETF by assets, and rival cap-weighted, diversified healthcare ETFs still face some risks due to opioid settlements, but some of that overhang is waning due to other factors.

Some market observers believe that while some pharmaceutical companies will be writing large checks to various states for opioid settlements, those risks are being reduced due to the House of Representatives pursuing impeachment against President Trump and the 2020 presidential election.

“Legislation addressing high drug prices is one area where political strife could stall near-term momentum. When changes in policy do occur, they are generally well signaled and slowly implemented, giving companies ample time to adjust business models and capital structures in response,” said Fitch Ratings in a recent note.

An area of concern is how Congress will treat drug prices. There appears to be bipartisan support for lowering drug prices, which is relevant to XLV and rival funds due to their large pharmaceuticals weight. While there may be momentum for that fight, it may not materialize over the near-term.

“Numerous drug pricing proposals emerged from Congressional committees, the Trump administration, the 2020 presidential candidates and state legislatures,” according to Fitch. “These include a greater role for the Medicare program in negotiating drug prices, the re-importation of drugs from other countries and the elimination of branded drug manufacturer rebates. Additional proposals include the use of international reference pricing in Medicare and commercial health plans, a requirement drug manufacturers pay rebates when price increases exceed inflation, and incentives to encourage increased competition for high-cost specialty drugs through the development of biosimilars.”

“Proposals that do not require legislation approved by Congress have a greater likelihood of implementation but the effect on profits would be muted compared with some of the more involved policy proposals. International reference pricing for some drugs in Medicare Part B is one example,” notes Fitch.