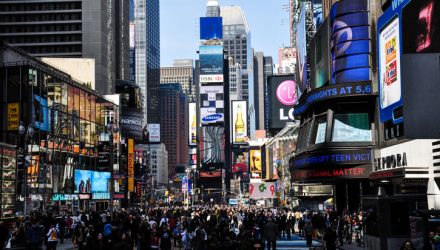 The tech-heavy Invesco QQQ Trust (QQQ), which tracks the Nasdaq-100 Index, is an ETF to consider during the months of June and July. That may surprise some investors because summer is usually not viewed as good months for stocks.

The May through October period is viewed as the weaker six-month period in which to own stocks and historical data back up that claim, but there are some surprising opportunities to consider from the long side during the summer, including some with familiar exchange traded funds (ETFs).

“It’s hard not to be impressed by QQQ’s midsummer track record. Over the past 10 years, the ETF has ended the month of July higher 100% of the time, with a robust average return of 4.44,” according to Schaeffer’s Investment Research. “That easily outshines SPY’s average July return of 2.90% (80% positive), and it nearly triples IWM’s mean July performance — up 1.59%, with only 60% positive returns.”

QQQ made its debut in the capital markets on March 10, 1999 and has provided a long-standing contributions to investors by providing the necessary exposure to some of the most innovative companies to rise up over the years. After 20 years, QQQ has become one of the largest U.S.-listed ETFs with well over $60 billion in assets under management.

Additionally, ETF traders love the QQQ because of its high volume, which makes it easy to get in and out of the fund for tactical purposes.

One of the reasons why the ETF has been able to stand the test of time is because it was also able to change with the times–not necessarily the transformational type of change where it loses its identity, but one that stresses evolution as opposed to revolution.

“Of course, this spotless 10-year streak doesn’t guarantee that QQQ will rally again in July 2019. But it does confirm that the tech sector has regularly left small-caps in the dust during the month of July, which generally features a glut of high-profile earnings reports,” according to Schaeffer’s.