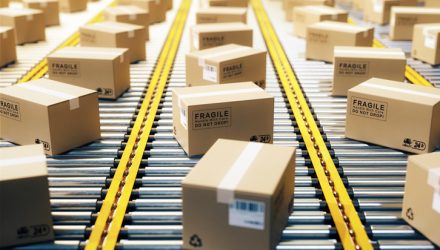 Online Retail ETFs: Rate Cut Could be a Helpful Push

Up 27% year-to-date, the ProShares Online Retail ETF (NYSEArca: ONLN) does not need a lot of assistance to cement its status as one of the best-performing retail exchange traded funds this year. However, the fast-growing fund and its rivals may get just that if the Federal Reserve proceeds with lowering interest rates.

That after ONLN is coming off a stellar Amazon Prime Day and against the backdrop of surging online retail sales outside of Prime Day.

“The Federal Reserve is expected to cut interest rates at the conclusion of its July 30-31 policy meeting, and investors may be wondering what that means for retail stocks,” reports Teresa Rivas for Barron’s. “Although it might not be Christmas in July, a few companies could see their fortunes affected positively.”

Online shopping is now the second-biggest component of the U.S. retail market after overtaking grocery stores and restaurants. Investors can also focus on this quickly growing segment through targeted exchange traded fund strategies.

According to the Commerce Department, consumer spending at non-store retailers, which includes online vendors like Amazon.com, increased by 1.7% in June and added to the overall increase in sales, Bloomberg reports.

Still, ONLN and other retail ETFs may not need a rate cut to continue thriving. After all the U.S. economy is strong and recent retail data points have been sturdy.

“Indeed, in one sense, we’re already in a great retail environment: Unemployment is low, wages are rising, and a relatively robust economy has supported consumer confidence readings at multiyear highs,” according to Barron’s.

Overall, the fuel for ONLN is going to be increased adoption of e-commerce. A rate cut may help, but its impact could be muted.

“Ultimately, an interest-rate cut might have little material impact on retail stocks, and even in a best-case scenario, it won’t fix the problems of some of the sector’s most troubled players,” reports Barron’s. “Still, improved investor sentiment and hopes that the stock-market party isn’t about to end can’t hurt.”