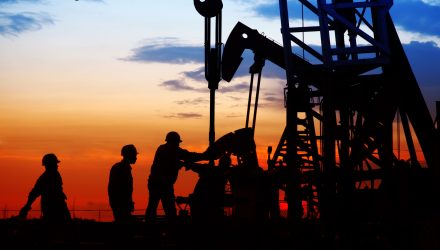 Oil and energy ETFs strengthened Friday as the markets looked to the potential risks associated with the Venezuelan crude supply on mounting political risks.

Crude oil prices were being supported by supply concerns out of Venezuela as political tensions ramp up. According to analysts at Fitch Solutions, Venezuela, which boasts the world’s biggest oil reserves, could see crude production drop by a third this year, Bloomberg reports.

Output from Venezuela has already declined 50% in the past five years due to poor economic conditions. Even without U.S. sanctions, the country’s production, which stood at 1.2 million barrels per day, could dip to 300,000 to 500,000 barrels per day, according to RBC Capital Markets.

Tensions escalated this week as National Assembly leader Juan Guaido moved to take over for strongman President Nicolas Maduro as the U.S. and other countries backed the shuffle in leadership.

Market watchers anticipate that any slowdown in Venezuelan crude output would come atop supply cuts out of the Organization of Petroleum Exporting Countries and its allies like Russia this year to bolster crude prices. Crude prices have jumped 25% from the late December lows on the lower supply outlook out of the oil cartel.