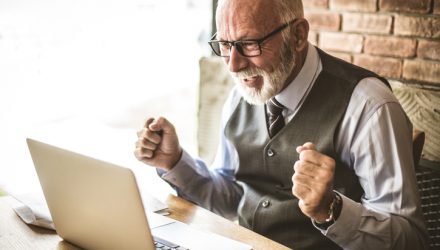 As has been widely reported in the recent days, the results from the Federal Reserve’s Comprehensive Capital Analysis and Review, or CCAR, were mostly impressive, providing an avenue for major domestic banks to significantly increase capital returns to shareholders, both in the form of dividends and buybacks.

CCAR “evaluated the capital planning processes and capital adequacy of 18 of the largest banking firms, including the firms’ planned capital actions, such as dividend payments and share buybacks,” said the Federal Reserve. “Strong capital levels act as a cushion to absorb losses and help ensure that banking organizations have the ability to lend to households and businesses even in times of stress.”

The Invesco KBW Bank ETF (NASDAQ: KBWB) is one exchange traded fund poised to benefit from those higher dividends and larger buybacks.

KBWB “tracks the KBW Nasdaq Bank Index and as the fund and index names imply, the products are dedicated to bank stocks, unlike diversified financial services, which usually future exposure to capital markets firms and insurance providers,” according to Nasdaq.

Because KBWB is a dedicated bank ETF, it stands to benefit more from the CCAR news than a traditional diversified financial services fund.

The all clear signal paved the way for banks to raise dividends and stock buybacks that would strengthen their company stocks left behind in the market rally. The 18 banks, a group that includes prominent U.S. lenders like JPMorgan Chase & Co. and Bank of America Corp., are expected to raise payouts to over 100% of expected earnings.

“Several marquee KBWB holdings, including Bank of America (BAC), JPMorgan Chase & Co. (JPM) and US Bancorp (USB), are expected to have higher payout ratios this year than they did following the 2018 CCAR, meaning dividends are growing,” notes Nasdaq.

Bank of America hiked up its dividend to 18 cents a share from 15 cents and could repurchase up to $30.9 billion in stock.

Indicating that the CCAR results are in fact good news for bank stocks, KBWB is up nearly 4% over the past week.