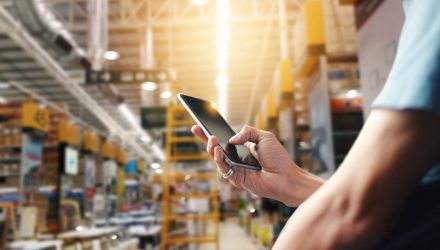 Retail stocks and exchange traded funds (ETFs) are rallying this year, including some brick-and-mortar names. For now, the ProShares Decline of the Retail Store ETF (NYSEArca: EMTY) is being pinched by physical retailers’ 2019 resurgence, but over the long haul, EMTY is positioned to benefit as more physical stores are shuttered as more shoppers embrace online shopping.

EMTY, which debuted in November 2017, takes a short position in brick-and-mortar retail stores to capitalize on weakness in traditional stores. EMTY follows the Solactive-ProShares Bricks and Mortar Retail Store Index, which “is the first comprehensive, public securities index composed solely of traditional retailers, and is positioned to potentially become an industry standard for measuring the health of bricks and mortar retailers,” according to ProShares.

EMTY is designed to deliver the daily inverse performance of that index, so if the benchmark falls 1% on a given day, EMTY should rise by 1%.

This year, retailers have been announcing closures of physical stores at an elevated pace, but analysts expect that rate to dramatically increase over the next several years.

“An estimated 75,000 stores that sell clothing, electronics and furniture will close by 2026, when online shopping is expected to make up 25 percent of retail sales, according to UBS,” reports The Washington Post.

That is an important data point for EMTY because the fund’s index mandates that component companies generate at least half their revenue from retail sales and that 75% of those sales occur in physical stores.

The UBS “analysts said the closures would affect a broad variety of retailers, affecting an estimated 21,000 apparel stores, 10,000 consumer electronics stores and 8,000 home furnishing stores,” according to The Washington Post.