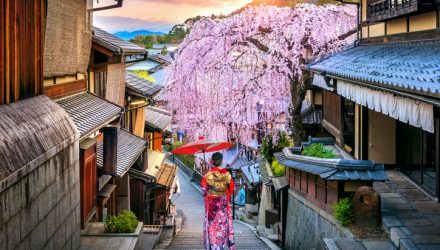 It Might be Time to Jump For Japan ETFs

Japan may not be the first market that comes to mind when investors look for ex-US developed market opportunities, but the Land of the Rising Sun could surprise some investors, making ETFs, such as the iShares MSCI Japan ETF (NYSEArca: EWJ), potentially rewarding plays.

The Japan market discount especially stands out because Japanese investors earn virtually nothing on bonds where yields were even trading in the negative territory, whereas U.S. investors can generate nearly 2% on a 10-year Treasury note. Consequently, more are looking into dividend-paying stocks but with some caution.

One of the primary selling points of the Japanese market is low valuations; some of the lowest in the developed world. Investors interested in Japanese stocks have paid less per dollar of profit in recent years. The Nikkei 225 index current trades at 14.5 times the company’s projected earnings per share. In contrast, the S&P 500, the same figure is 20.1.

“A few other factors work in its favor. A weakened Japanese yen – currently at the lowest level against the dollar since mid-2019 – has historically tended to help lift Japanese stocks,” said BlackRock in a recent note.

Governance changes have made large Japanese companies more focused on shareholder returns. Investors can more easily pressure the highers up to enact changes, including the disentangling of Japan’s tangled cross-shareholdings.

“We expect the Bank of Japan to stand pat on its ultra-loose monetary policy and the government to launch sizable fiscal stimulus this year, providing further support for the market,” said BlackRock. “An ongoing improvement in corporate governance is another positive. Share buybacks have surged – up 40% in 2019 to a record high of 7 trillion yen (about $64 billion), according to Morgan Stanley. This should help boost return on equity and share performance. Yet most foreign investors are still underweight the market.”

Furthermore, Japanese companies have generated more cash for shareholders in recent years, and the dividend growth projections continue to rise. Dividend yields are now decent enough and are much more attractive when compared to Japan’s near-zero bond yields.