You are at:Home»Core Equity Channel»Investors May Want to Consider Nibbling at Emerging Markets ETFs 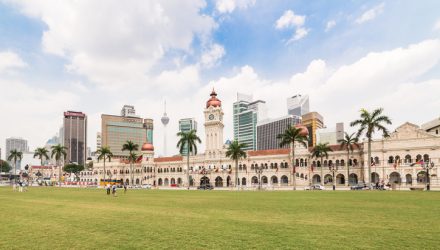 Investors May Want to Consider Nibbling at Emerging Markets ETFs

“Reasons for caution are everywhere. Developing-nation stocks are headed toward their worst month since October, while 21 out of 24 currencies tracked by Bloomberg are down in May as investors scale back their exposure to risk,” reports Bloomberg.

Investors are increasingly emphasizing low cost a prime motivator for allocating capital in 2019, which makes ETFs like IEMG an attractive option. The fund provides this core EM exposure at a paltry 0.14 percent expense ratio.

Signs of Life in Emerging Markets

Investors are beginning to look at EM opportunities as substantial markdowns, especially if trade negotiations between the U.S. and China result into something materially positive. From a fundamental standpoint, low price-to-earnings ratios in emerging markets ETFs have made them prime value plays as capital inflows continue.

“In equities, JPMorgan Asset Management says it makes sense to bet on companies that depend more on the domestic market and are, therefore, protected to some extent from a trade slowdown,” according to Bloomberg.

In the second quarter, two of the top four ETFs in terms of assets lost are emerging markets funds.

“Flows into emerging markets are highly sensitive to external risk factors such as global growth, changes in monetary policy in the U.S. and a general market sell-off,” according to CNBC. “Add to that domestic factors such as high current account deficits, weak currencies and a dependence on commodities, then these markets can make for a risky investment.”