Rumor has it the hackers sent Bezos a malicious file in a private message. They threatened to steal everything: emails, business secrets, private messages, even nude photos.

You’d think if there was one guy on earth who was “unhackable”, it’d be Bezos. Not only is he the richest person in history, he’s a tech genius, the head of arguably the world’s most powerful tech company.

He has an army of computer geniuses whose sole job is to secure Amazon’s computer systems from hackers. And his iPhone was still hacked!

Cyberattacks Are Now the Fastest-Growing Crime in America

Cyberattacks accounted for $2 trillion in losses in 2019 alone!

In one case, cybercriminals brought Baltimore city to its knees. Hackers digitally seized 10,000 government computers and demanded $75,000 to release them.

For five weeks government workers were locked out. Folks in Baltimore couldn’t pay water bills, property taxes, or even close on a house. This might sound extreme, but these attacks happen all the time.

Hackers recently disabled computer systems in Lake City, Florida. And get this, the city was forced to hand over $460,000 to unfreeze its network. With all of these attacks, it’s no surprise cybersecurity stocks are on a tear.

Cybersecurity Stocks Are One of the Hottest Investments This Year

The largest cybersecurity ETF (HACK) flew to new all-time highs last week. And it’s crushing the S&P 500, as you can see below: 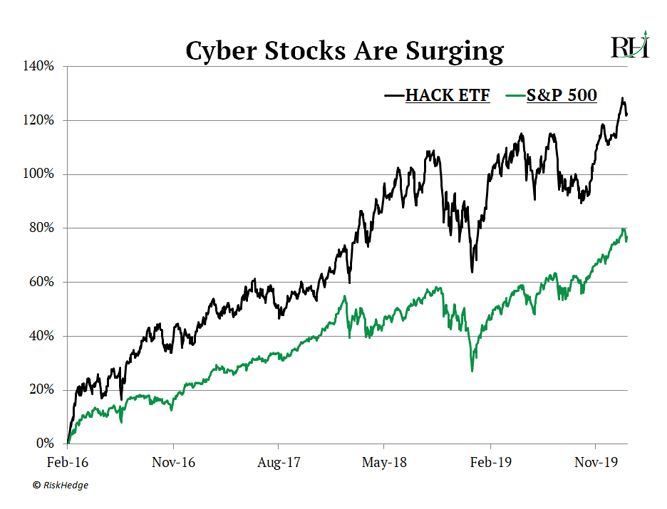 My longtime readers shouldn’t be surprised. A year ago, I wrote about the big opportunity in cybersecurity stocks.

I highlighted a small company called Okta (OKTA), which provides US military-grade cybersecurity everywhere, on any device. If you bought Okta after reading my article, nice call—you’re sitting on 65% gains.

I’ll tell you about a few more cyber stocks set to soar in the coming year. But first, you should understand the one key driver behind the moneymaking boom in cyber stocks that I expect to run for years.

When It Comes to Protecting Digital Networks, No Cost Is Too High

Digital networks are the backbone of most companies today. Stuffy old banks used to move cash around with armored vans. Now, they mostly transfer billions of dollars with a keyboard.

Hackers are constantly finding new ways to exploit these vulnerable systems. So companies must keep pouring money into their digital defenses.

Bank of America (BAC) CEO Brian Moynihan has said the bank had an unlimited cybersecurity budget. When’s the last time you heard a CEO say a budget for anything was “unlimited”? In all my time as a professional investor, I’ve only ever heard this line from governments.

And That Brings Me to Today’s Massive Opportunity

I’m investing my own money in the cybersecurity firms that safeguard the US government’s computer networks. These companies are called “cyber contractors”. And they’re the single best way to play the cybersecurity boom.

You see, it’s one thing when Jeff Bezos or the city of Baltimore gets hacked. Although these are serious crimes, they’re not a matter of national security.

When it comes to the US government’s network, it’s a different story. If the US military is breached, people will likely die.

For the Pentagon, even a 0.0001% chance of being hacked is unacceptable. Protecting these networks is one of the most crucial tasks in the world.

And the US government is spending heaps of cash to keep them safe. Uncle Sam will shell out $18 billion on cybersecurity this year—a 230% jump from a decade ago.

Leidos (LDOS) is one of the US government’s largest cyber contractors. Roughly half of its revenues come from the Pentagon!

You can see Leidos is leaving the HACK ETF in the dust: 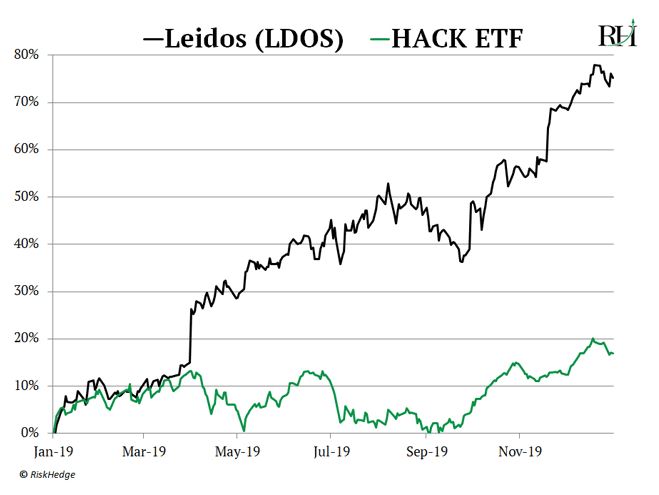 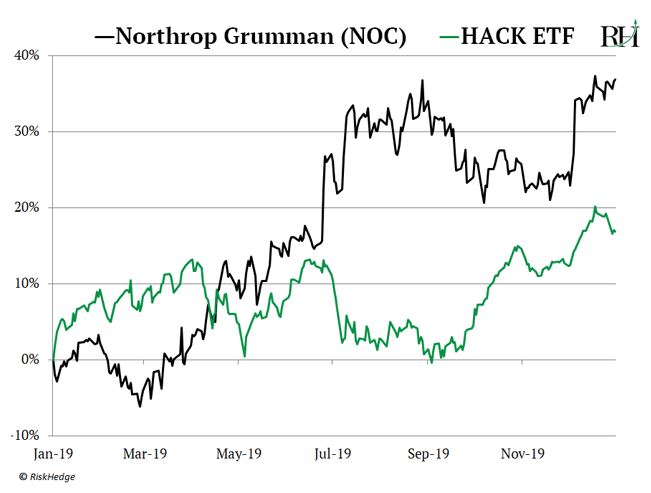 The rising threat of hackers guarantees billions of defense dollars will pour into these companies. For this reason, these are the stocks I personally own.