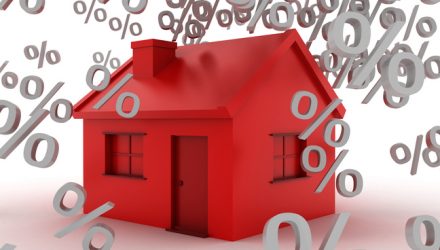 What’s one of the surest ways to make money investing?

Find a big lie that everyone believes… bet against it… and wait for the truth to come out.

Have you seen the movie The Big Short? It tells the story of a few clever investors who made a killing betting on the US housing collapse in 2007–2008.

As crazy as it sounds now, in the mid-2000s, most folks believed that US house prices “never go down.” A handful of investors figured out this was a huge lie… and placed bets to profit on the housing collapse.

When it all came crashing down, they walked away with over a billion dollars profit.

I’m sure you’ve heard this “fact” before:

Like all believable myths, there’s a grain of truth to it.

A 2016 Pew Research study found more than two-thirds of Americans under the age of 35 rent. And of the 46 million renters in the country, roughly half were millennials.

Young folks will never buy houses like their parents did, the story goes, which will keep a cap on house prices forever.

In Ireland where I’m from, this is what you call “malarkey.”

What did you do after you graduated college? If you’re like me, you probably moved to a city, found a job, and rented a place.

Research from the University of Minnesota tells us most Americans in their 20s rent instead of buying a home. And it’s been this way for 60 years.

In other words, our 20s are peak “renting” years. Every generation of Americans follows this path.

But then you get married… and start thinking about having kids. And what comes soon after? Buying a home.

Millennials Tricked Everyone into Thinking They Were Different

As I mentioned a few weeks back, record levels of student debt forced many young folks to put off buying a home.

And many millennials graduated college into a job market that had been decimated by the 2008 financial crisis. This pushed millennials to wait a little longer to buy their first homes.

Millennials Are Finally Growing Up and Buying Houses

According to the National Association of Realtors, one in three homebuyers today is a millennial.

As you may know, millennials are the biggest generation in US history—bigger even than baby boomers. And they’re hitting prime home-buying age right now.

The largest generation in history is piling into the housing market… and hardly anyone believes it!

Quicken Loans is America’s largest mortgage broker. Last month, it broke the record for the best lending year in the company’s 34-year history… with three months still left to go in 2019.

How to Invest in the Biggest Housing Boom

If you bought NVR in February, nice call. You’re sitting on a 40% gain. If you aren’t invested in the “quiet housing boom” yet, it’s not too late…

What’s the first thing you do when you buy a new house? You start thinking about putting your own “touch” on the house.

What color sofa should go in the living room? How to remodel the old bathroom? What color to paint the kitchen?

As the tidal wave of young homebuyers hits the market, home improvement stocks are BOOMING.

I’m sure you’ve been inside a Home Depot (HD) store. But have you seen its stock lately? It’s hitting all-time highs, as you can see here: 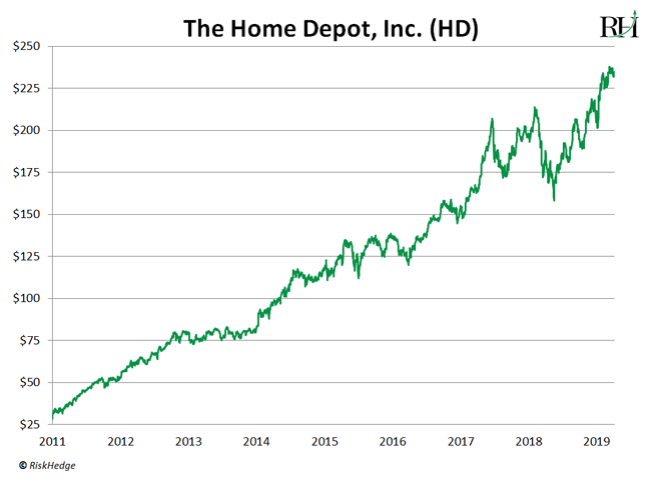 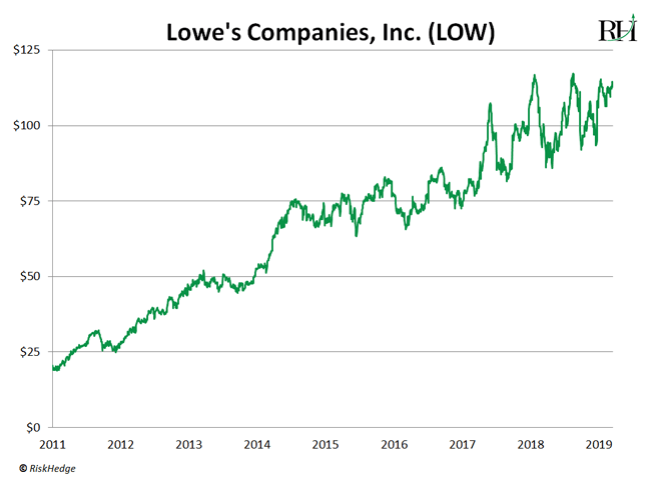 On the last earnings call, Lowe’s CEO said the company added a record 35,000 new “pro” customers in the past three months. This tells us business for professional renovators, carpenters, and contractors is booming. 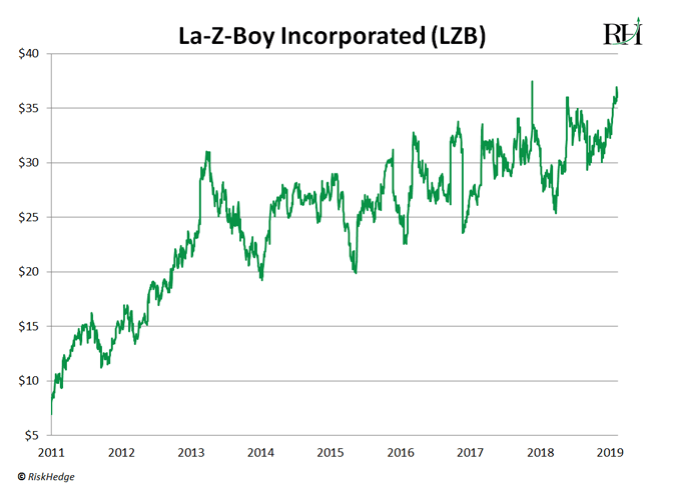 The furniture business isn’t exactly exciting. And it’s certainly not a rapidly growing or disruptive industry.

But La-Z-Boy’s retail sales have shot up 20% in the past year!

I could go on and on with examples. Stocks of paint suppliers… plumbing companies… and window makers are hitting record highs too.

And it’s likely just getting started…

Over 85% of American homebuyers don’t buy brand new homes. Instead, they buy existing homes that have already been lived in. And a lot of old houses need a total facelift.

Roughly 4 in 10 homes in America were built before 1970. And when folks buy an old house, they often turn around and invest tens or even hundreds of thousands of dollars into refreshing it.

As I showed you, record numbers of young homebuyers are hitting the market…