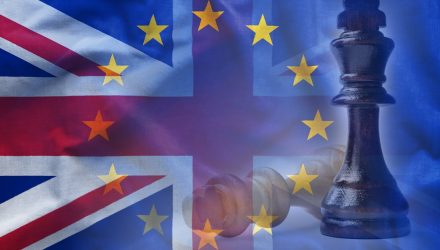 In December, the Bank of England cut their forecast for British quarterly economic growth in the last three months of 2018 to 0.2% from 0.3% and warned that conditions won’t likely change in early 2019. That could be a sign more challenges are ahead for U.K. equities and EWU this year. EWU, the largest U.K. ETF trading in the U.S., is up 4.20% to start 2019.

“While we identify a number of companies that could face long-term adverse developments following a no-deal Brexit, namely in the automotive space, we also see most disruptions as short term in nature and thus unlikely to materially alter our long-term views,” said Morningstar in a recent note.

The Bank of England (BOE) recently warned that the global slowdown was pulling down Britain’s economy and the negative effects started sooner than expected.

In response to the weakness, the BOE decided to hold rates at 0.75% as expected. Central bank officials have stated that interest rates could move in either direction after Brexit based on the country’s ability to avoid any fallout from the Brexit.

“While a severe and prolonged downturn in the U.K. economy will have material implications for companies with significant revenue tied to the U.K. market, we should at the very least be cognizant of a potential contagion effect of a global recession, even if most forecasts we have seen do not consider that to be a meaningful risk,” said Morningstar.