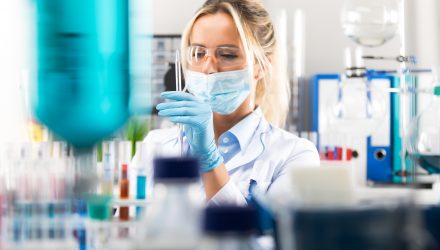 Healthcare ETFs weakened Wednesday after Abbot Laboratories (NYSE: ABT) slipped on a revenue miss and revealed an uninspiring forecast for the first quarter of the new year.

ABT shares declined 2.3% Wednesday after the announcement. ETFs with heavier tilts toward ABT were also dragged down by the report, with the iShares US Medical Devices ETF (NYSEArca: IHI) down 0.5% and First Trust Nasdaq Pharmaceuticals ETF (NasdaqGM: FTXH) 0.6% lower.

Furthermore, the healthcare company projected current-quarter earnings below analysts’ estimates. Some anticipated the stronger U.S. dollar to hurt profits as a large portion of their revenue comes from overseas sources.

“Some may look at these results and guidance as nothing too special, especially since Abbott had a lower tax rate than what we were anticipating, which helped this quarter’s results,” Edward Jones analyst John Boylan said.