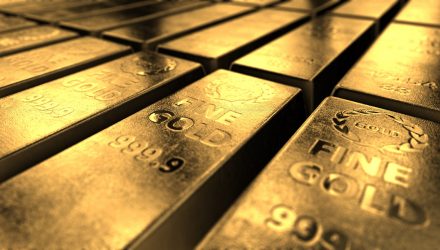 Gold ETFs Look to Find Their Way in May

“At Friday’s close of $120.65, GLD was down 0.5% on a month-to-date basis. It’s still early innings, but another negative return in May would mark GLD’s fourth monthly loss in a row — its longest losing streak since the six-month slump that kicked off last April,” according to Schaeffer’s Investment Research.

A factor for gold investors to consider is seasonality, meaning this time of year is usually unkind to the yellow metal.

“From a seasonality perspective, the odds are stacked against GLD. Over the past decade, GLD has closed the month of May on positive ground only 30% of the time, and its average return for the month is a decline of 1.10%,” reports Schaeffer’s. “Based on April’s close, another ‘average’ May for GLD would place the shares around $119.87 by month’s end — which would mark its first monthly close below $120 since last November, incidentally.”

“Which makes it more interesting still that options players seem downright unenthused about the upside prospects for GLD. Total call open interest of 1.47 million contracts registers in the low 22nd annual percentile, while comparable put open interest of 888,7444 contracts arrives in the much more robust 73rd percentile of its 52-week range (per Trade-Alert),” according to Schaeffer’s.