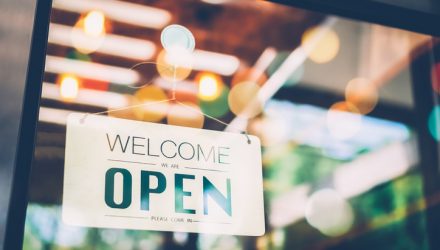 Get Staples Exposure Without a Big Commitment

Investors that want the benefit of steadily rising dividends while gaining some defensive exposure via the consumer staples sector do not have to turn to dedicated staples exchange traded funds. Some dividend ETFs, including the ProShares S&P 500 Aristocrats ETF (CBOE: NOBL) feature robust exposure to staples stocks.

NOBL tracks the S&P 500 Dividend Aristocrats Index, a benchmark that only includes companies that have boosted dividends for 25 consecutive years. Dividend growth strategies, including NOBL, often feature exposure to the quality factor and a recent analysis of NOBL’s underlying index confirms as much. At a weight of 23.58%, consumer staples is NOBL’s largest sector allocation, according to ProShares data.

“It’s hard to get stoked about a sector with weak earnings growth and pricey valuations,” reports Daren Fonda for Barron’s. “But consumer staples, despite those unfavorable traits, have managed to outperform the market this year. And while the sector isn’t ‘safe,’ at least by historical standards, there are still some attractive stocks in the space, according to Bernstein Research analyst Ali Dibadj.”

“Dibadj and his team have Outperform ratings on Coca-Cola, PepsiCo, P&G, and Estée Lauder. They also have Buys on Hershey (HSY), Mondelez International (MDLZ), and Tyson Foods (TSN),” reports Barron’s.

Indications that the Federal Reserve could soon lower interest rates could fan the flames of a rally for dividend stocks. If yields on U.S. government debt decline, dividend stocks often become more attractive to income investors.

“In a tough competitive environment, Dibadj recommends avoiding commodity-oriented stocks and sticking with those that can maintain prices, capture cost savings, or benefit from other growth drivers like innovation or ‘marketing prowess,’” according to Barron’s.