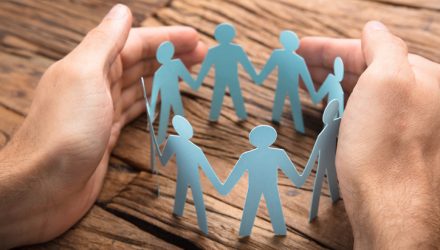 Over the past year, the Russell 2000 and S&P SmallCap 600 indexes are trailing the large-cap S&P 500 by wide margins. In fact, both small-cap benchmarks are in the red during that span while the S&P 500 is higher by nearly 10%.

Investors looking for safety with small-cap stocks should consider the ProShares Russell 2000 Dividend Growers ETF (CBOE: SMDV), which is up more than 3% over the past year.

SMDV, a dividend spin on the Russell 2000, the benchmark U.S. small-cap index, tracks the Russell 2000 Dividend Growth Index, which includes small-cap firms with dividend increase streaks of at least a decade. The ProShares ETF is one of the highest rated funds in the small-cap value category.

Small-cap “earnings deterioration relative to large caps has stabilized over the past few months, while valuations remain fairly contracted when compared historically,” according to Barron’s.

Speaking of earnings, many small-cap stocks are not profitable, but dividends can be a quality trait. Said another way, many SMDV components, because they are dividend payers, are profitable companies.

Dividend growth stocks, such as those found in SMDV, are often seen as quality names with strong balance sheets. SMDV proved less volatile and performed less poorly when small-cap benchmarks swooned last year, plus the ProShares fund has a higher dividend yield than the Russell 2000.

Lower short-term yields and a steeper yield curve could help small-cap financial services companies, notes Barron’s. That would be a help for SMDV, which allocates 12.29% of its weight to financials, its third-largest sector weight.