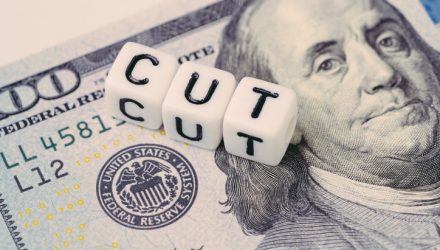 As widely expected, the Federal Open Market Committee lowered its benchmark funds rate by 25 basis points to a range of 1.5% to 1.75% on Wednesday.

The move comes as the labor market remains strong and that economic activity has been rising at a moderate rate. This was the third cut this year as part of what Fed Chairman Jerome Powell has characterized as a “midcycle adjustment” in a maturing economic expansion.

“Job gains have been solid, on average, in recent months, and the unemployment rate has remained low,” a statement released Wednesday said. “Although household spending has been rising at a strong pace, business fixed investment and exports remain weak. On a 12-month basis, overall inflation and inflation for items other than food and energy are running below 2 percent. Market-based measures of inflation compensation remain low; survey-based measures of longer-term inflation expectations are little changed.”

Consistent with its statutory mandate, the statement said the committee seeks to foster maximum employment and price stability.

In determining the timing and size of future adjustments to the target range for the federal funds rate, the committee said it would assess realized and expected economic conditions relative to its maximum employment objective and its symmetric 2 percent inflation objective.

“This assessment will take into account a wide range of information, including measures of labor market conditions, indicators of inflation pressures and inflation expectations, and readings on financial and international developments,” the statement said.

Jeff Yastine is a senior equities analyst at Banyan Hill Publishing, said since this time a year ago, when Fed chair Jay Powell did his about-face on interest rates, the central bank has been pretty transparent in its eagerness to cut interest rates.

“I don’t expect anything different this time around,” Yastine said. “The Fed will continue to be accommodative – if not always in word — it’s not going to hand investors an early Christmas gift each meeting –, then at least in spirit. So far, Wall Street is playing along to that tune, with the idea that the Fed’s rate cuts will help get corporate America past the Trump trade war, and a slower economy.”

Yastine said the bigger concern for investors should be asking what happens if and when the Trump administration resolves, even temporarily, its trade problems with China.

“Without the trade war on tap, it leaves the Fed less reason to continue being accommodative in cutting interest rates,” he said. “But my sense is that those worries are likely 4-6 months away. For now, it’s all about anticipating more ‘good news’ – on trade, on interest rates, on US economic growth – which should bode well for the stock market for at least the next few quarters.”