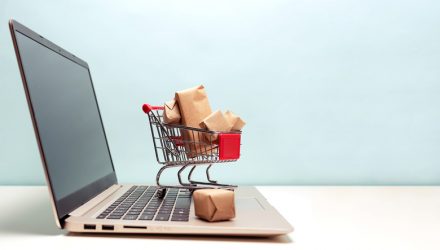 ONLN seeks investment results, before fees and expenses, that track the performance of the ProShares Online Retail Index. The index tracks retailers that principally sell online or through other non-store channels. The index uses a modified market-capitalization weighted approach, is rebalanced monthly and is reconstituted annually. Retailers may include U.S. and non-U.S. companies. To be eligible, retailers must: be classified as an online retailer, an e-commerce retailer, or an internet or direct marketing retailer, according to standard industry classification systems; have a market capitalization of at least $500 million; have a six-month daily average value traded of at least $1 million; and meet other requirements.

While the holiday season is reaching the tipping point, Lydon contends there’s good reason to consider ONLN. Essentially, some holiday shoppers may just be late in getting to it. Given how spending is highest in November and December, with estimates at three-quarters of a trillion dollars, the prevalence of online shopping means a lot of companies can profit.

The percentage of online shopping versus actually going to retail stores is increasing. It’s expected to climb to 14%. Lydon states how it was surprising, given the assumption that so much shopping is seeming done online. That said, people are shifting based on convenience.

Lydon, himself, explains how it’s not just about going to Amazon (AMZN) for consumer staples, but food as well, thanks to the acquisition of Whole Foods (WFM). He believes that’s a reflection of how the future is basically going to play out in a lot of ways, as there’s a lot of upside and room to grow.

“What this ETF does, is specifically invests in companies that do most of their business online,” Lydon explains. “Some of the biggest holdings are companies like Amazon and Ali Baba. Some of the companies like GrubHub, Stamps.com, eBay, and Groupon, are other components within that index.

“Over time they change, and the weightings change for sure, but when you look at the expansion of online buying in the U.S., which accounts for 75% of the stocks in this index, but also spreading over to China (20%) and other countries, there’s a lot of room for this to grow.”

As Lydon also believes this could still be in the early stages of online shopping’s rise, ONLN could be a good ETF to get behind for the future. That said, it’s not the only ETF that sits in this space.

In deciding how to focus on this ProShares fund, Lydon notes the commitment to online shopping in the first place is important. With that in mind, ProShares does have another ETF that is structured as long online and short big box stores. It’s a creative and successful model, given the nature of stores closing. Other ETFs are more diversified overseas.

When looking at ONLN however, it’s more representative from a market cap weighted standpoint of online buying around the world. The focus on Amazon is the largest, however, the potential of smaller companies suddenly taking off allows for a good reason to keep the ETF in mind, rather than ruling out the diversified approach.

Regarding whether or not it’s a 200-day moving average play, Lydon believes it can be both long term hold for the buy-and-hold investors, while also working for on a shorter side, due to the aggressive nature of these companies.

“As long as online buying increases and the economy is strong, that’s great,” states Lydon. “If we happen to go into a recession, even a big recession, these companies are going to get into some headwinds as well. So you could definitely trade it on a 200-day average, but when you talk about new and innovative companies, you can’t find a better group than the companies that make up this index.”