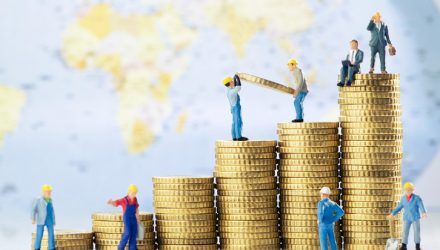 Small-cap stocks are creeping higher, but these names can be volatile. However, there are ways for investors to harness the potency of small caps in conservative fashion and with a dividend kicker, too. Enter the ProShares Russell 2000 Dividend Growers ETF (CBOE: SMDV).

“The small cap Russell 2000, trailing other indices in the march to new highs, broke its previous high from May 6 of 1,618.4 early Monday and then climbed higher into the close. The Russell has risen near that level previously but failed to break above it,” according to CNBC.

The struggles of small caps to take old highs actually underscore the advantages of the less volatile SMDV. Plus, investors don’t have to leave upside on the table as the ProShares fund is up 4.70% since the start of the fourth quarter and resides just 2.32% below its 52-week high.

“Improving economic sentiment has prompted some investors to take a second look at underperformers among both value stocks and small-cap shares. Value shares tend to be concentrated in economically sensitive sectors such as financials and energy,” reports Reuters. Shares of small-cap companies, which tend to be more domestically focused than their large-cap counterparts, often track investors’ outlook on the U.S. economy.”

SMDV allocates nearly 17% of its weight to the financial services sector, a prime value destination.

Quality stocks, including those on SMDV’s roster, present an opportunity to diversify a portfolio. Specifically, investors should consider quality dividend growth stocks that typically exhibit, stable earnings, solid fundamentals, strong histories of profit and growth, commitment to shareholders and management team conviction in their businesses.